Home » Little Girl Dresses Up For Dance With The ‘Beast,’ Doesn’t Know Navy Dad Is Under Mask 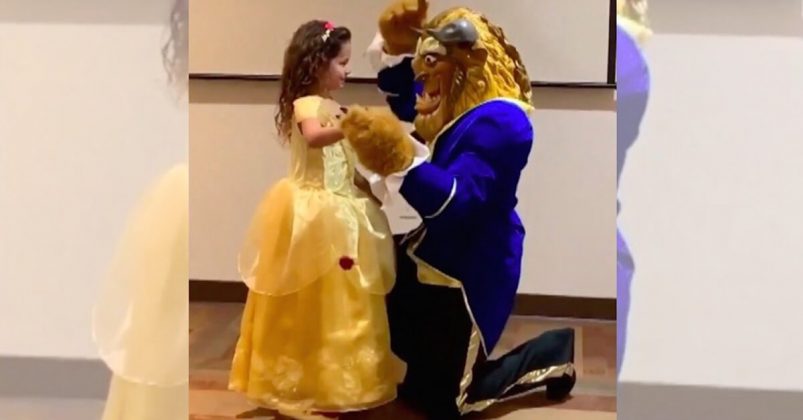 Little Girl Dresses Up For Dance With The ‘Beast,’ Doesn’t Know Navy Dad Is Under Mask

Morgan Richards, a 6-year-old girl with an affinity for Disney princesses, had a ball dancing with the Beast, from “Beauty and the Beast,” while dressed as Belle.

Morgan’s father, who’s been deployed for the past six months, gave his daughter the surprise of her life when he revealed that he was the familiar face behind the mask.

While dancing hand and hand, Morgan relished the fairytale moment.

While the audience looked on affectionately, the only people in the room privy to the surprise were Morgan’s mother, Elizabeth, and father, Brandon.

Steeped in anticipation, Brandon couldn’t conceal the secret any longer.

Upon removing his mask, Morgan shouted “daddy!” and embraced her father with tender love and care.

The two basked in each other’s presence while spectators awed over the heartwarming reunion.

Elizabeth states that they try to make each homecoming more memorable than the last.

According to Elizabeth and Brandon, the “element of surprise” makes the reunion all the sweeter.

In an effort to make their kids feel cherished and special, Elizabeth and Brandon try to compensate for the time they don’t get to spend with their father.

Morgan’s brother got a surprise as well when he saw his dad inside one of his favorite donut shops ready to hug and shower him with affection.