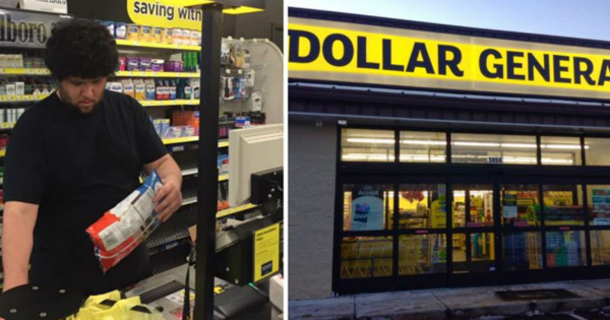 Man Felt Ashamed & Embarrassed Once His Card Was Declined, Seconds Later, Cashier Reached Across The Counter

As this man was shopping for discounts at a Dollar General Store, he realized he was in a tough position. He brought his items up to the aisle and put them through checkout but discovered that he didn’t have his wallet. This situation made him feel embarrassed and humiliated. Since he was already seeking discounts, this moment made him look poorer than what he really was. Suddenly, the man found a credit card in his pocket.

Everything seems to be okay now. He gave it to the cashier to buy for the items he needed. But another embarrassing moment happened. The credit card was declined, and the elderly man was embarrassed and turning red.

Tim McKellar was in line behind the old man with the bad credit card experience. He watched as things went horribly and embarrassingly wrong for the old customer. McKellar also noticed that the old man was a veteran because he wore a cap proudly displaying that information.
But the man could not remember his pin number, so the card was declined.

Tim watched in horror as the veteran failed to pay for his items.

“He tried a couple of different times when another lady offered to help him again with no luck,” Tim wrote on Facebook.
But then the cashier, Jacob Wittman, did something that left the old veteran and Tim McKellar in awe. He stepped in and offered to pay for the gentleman’s items.

Tim was stunned. He had not witnessed such generosity in his Oklahoma town in such a long time. Especially from a younger person.
“That’s when the cashier Jacob Wittman pulled his wallet out and told the lady (who had been helping) to scan his card.”
The veteran was not used to accepting help. So he tried to stop Jacob before he paid. But it was too late. Jacob paid for the items and then told the veteran words that were like music to his ears.

Yes, sir, I did. And, you don’t owe me a dime.”
Tim McKellar was amazed at how this minimum wage employee opened his wallet to a veteran in need. While the rich Americans continue to strip benefits away from veterans and hard-working people, this young Millennial’s heart was big enough for him to pay for the old veteran’s groceries.

“Now this kid obviously makes minimum wage or real close to it and probably didn’t have the extra money to spare. I thanked him for what he had done, asked for his name and took his picture. Let’s give this Good Samaritan the acknowledgment that he deserves.”
Tim McKellar’s post got the young cashier the “acknowledgment that Jacob deserves.” It quickly went viral and attracted thousands of reactions and hundreds of comments.

“Such an awesome act of kindness. Sending you a big hug and many blessings from miles and miles away,” one proud reader shared.
Another wrote, “Jacob, you are a good-hearted young man. Thank you for helping the elderly and veterans. God bless you!”
Jacob proved that America is still a country of kind-hearted people who are generous enough to give.