Home » Man Finds Odd Duffle Bag In His Closet, Horrified When He Looks Inside 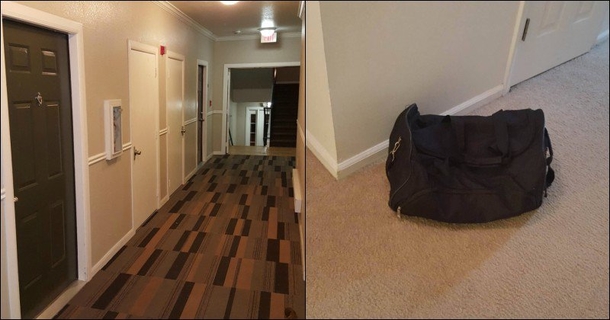 Man Finds Odd Duffle Bag In His Closet, Horrified When He Looks Inside

A Colorado man was recently perplexed after finding an odd duffle bag that he’d never seen before in his life on the floor of a closet at his home. Unfortunately, the night would take a sickening turn when he peered into the bag that wasn’t his — and that’s when horror and disbelief set in.

The eerie incident was recently shared to Reddit after a man, believed to be named James, endured quite the frightening ordeal. As explained, he recently got a job as a Tech Support agent, working the graveyard shift, and was slowly adapting to life in his new apartment.

According to the post, he works from 1 a.m. until noon, Friday through Monday, and keeps those same waking hours during his weekends in order to maintain his sleep schedule. However, he soon noticed a few things around his house that started to make him uneasy.

“I live alone, I started noticing weird things happening around my apartment when I would get home from work, or after waking up on my days off,” he wrote. “Just little things at first, lights being on, that I swear I turned off, doors being left open or closed.” Although he initially brushed these incidents off as him being forgetful or tired, things eventually got to a point he couldn’t ignore.

One day in December, his credit card was charged over $3,000 – an odd event since he always had his card on him. The next morning, things completely boiled over when James woke up at 1 a.m. to start taking calls for work after his boss gave him permission to work from home, but just two hours in, the unthinkable happened – he heard someone at the door.

However, it wasn’t a knock. Around 3:00 am, someone unlocked his door. He recalled, “I don’t mean, picked the lock, I mean used a key. Thank god the secondary deadbolt was engaged but the person jiggled the door to try and get it to open.” By the time he got his gun and opened the door, the mystery person had already high-tailed it out of there. Although he called the cops, police were completely helpless in identifying who had tried to enter his home.

Fast forward to some time later that month when James decided to put up his Christmas tree and ventured into his locked storage closet, which opens with his apartment key, in the hall of his apartment complex. You can imagine his surprise to find an odd duffel bag inside that wasn’t his. Doing as anyone would, he peered inside – and that’s when he felt a lump in his throat. 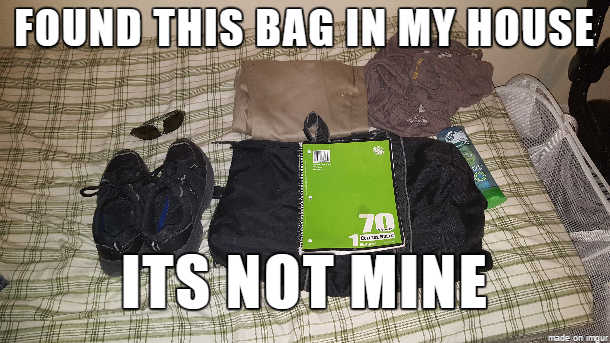 Along with a change of clothes, sunglasses, shoes, and toiletries, he found a notebook, and what was inside left him completely horrified:
There were notes about me. What hours/days I worked, notes about my cats, and updated notes that they were no longer there and the date, my credit card number! As I went further and further back in the notes, I found two words, circled multiple times “Balcony Door.”

I was practically in shock and when I saw these notes, I completely shut down. There were notes about when I would leave on my days off, what I brought back, from where (probably based on shopping bags) How long I was gone…this guy stalked me for at least two months… 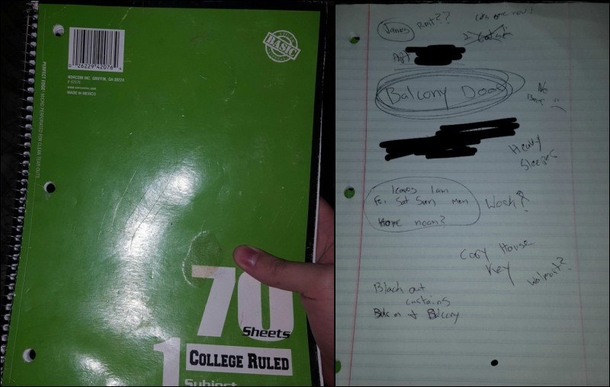 Police took fingerprints but since it’s a non-urgent case, he says the results could take up to a year. As for the stolen money, officers were able to track down the woman who used his card but are still trying to get information on the man who gave her the numbers.