Home » Man Leaves Fiancee For Woman He Met Online, Gets The Shock Of A Lifetime

Man Leaves Fiancee For Woman He Met Online, Gets The Shock Of A Lifetime

When Rebecca Lewis, 30, discovered that her fiance was leaving her for a woman he had met online and started a relationship with, she was devastated. She packed her things and decided to track down the woman she had been left for, which was when she made a surprising discovery: Her fiance was the victim of a romance fraudster.

Lewis’ fiance Paul Rusher, 29, was first contacted by the mystery woman, who called herself Kristen White, when he received a random friend request from her on Facebook, Mirror.co.uk reported. The request came just weeks after Rusher had proposed to Lewis, and the woman then began sending Rusher at least 10 messages a day for months.

As the two continued talking, Rusher told White that he loved her and was planning a future with her.
When Lewis came across the messages, she confronted her fiance, who told her he was leaving her. They called off their engagement and she packed her bags and left the home that they shared together.

“I suspected Paul had been cheating on me, but I never thought he’d dump me for someone he hadn’t even met,” she told Mirror.co.uk. “I was heartbroken when I saw the messages from Kristen. It was a slap in the face, especially as they’d started talking so soon after Paul had proposed.” 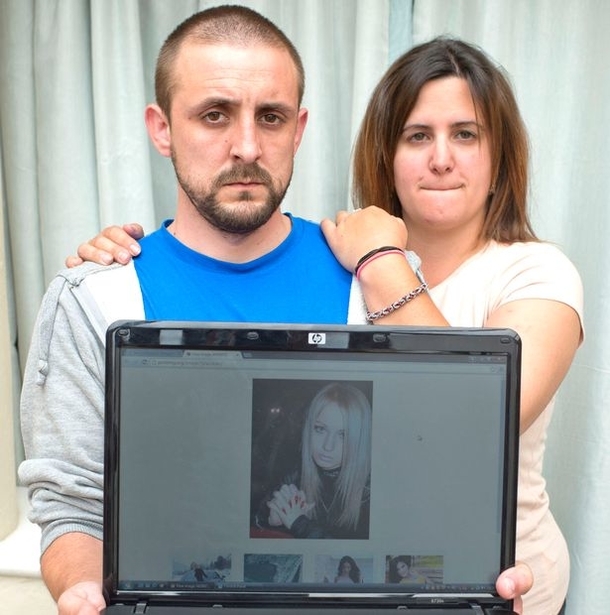 Lewis became suspicious of the situation after she noticed that Kristen had been using several different numbers to contact Rusher, and she decided to track down the suspicious other woman.

During her investigation of White, she discovered that scammers were using the picture of a Russian model for White’s profile and were trying to con Rusher out of money. She made the discovery after she searched the term “romance scam” and an image of White came up as a result, AOL.com reported.

When Lewis made the discovery, Rusher was getting ready to send White over $3,000 for a flight from Russia to the U.K. to be with him.
Lewis stopped him from sending the money and explained to him what was really going on.

“He’d told his friends and parents about Kristen and had to go back and admit she didn’t exist,” Lewis said. “It was embarrassing but I helped him write to Kristen, saying the scam had been rumbled.”

After the discovery, Lewis took Rusher back.
“Paul realized how much of an idiot he’d been and we slowly rebuilt our relationship,” she said. “My parents were horrified at first when I decided to get back with him as he’d put me through hell, but now we’re stronger than ever.”