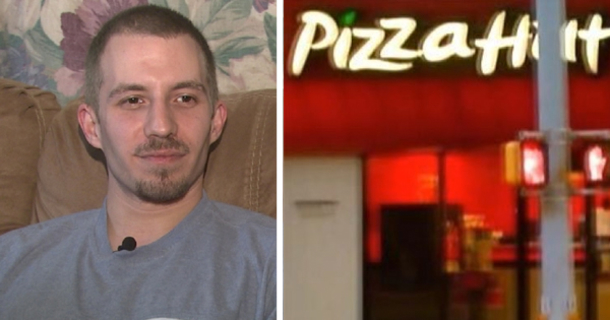 Manager Decides To Let Employees Stay Home With Their Families For Thanksgiving. Soon After, He’s Fired

Tony Rohr learned the one question that you aren’t able to ask in today’s corporate America. “Why can’t we be the company that stands up and says we care about our employees?” Rohr states as he questioned his bosses at the Elkhart, Ind., Pizza Hut where he is a store manager.

To them, it was certainly the wrong question. Pizza Hut forced Rohr (pictured below) to terminate his job at the chain pizza outlet where he worked his way up to general manager status for over 10 years at the Pizza Hut on Elkhart’s Jackson Boulevard.

What prompted Rohr to sacrifice his career? He just wanted his workers to spend Thanksgiving with their families, not catering to people who for whatever reason choose to chow down on chain-store pizza this Turkey Day.

In previous years, he says, the Pizza Hut closed on Thanksgiving. He wanted to remain closed this year. But his bosses told him to open up.
When he refused, they fired him, he told local TV station WSBT.

The station attempted to get a response from someone representing Pizza Hut, but as of late Tuesday, no one from the pizza chain replied.
Pizza Hut is owned by Yum! Brands, which also owns the Taco Bell and KFC (formerly Kentucky Fried Chicken) fast food chains.

How much more profit the company will earn by opening on Thanksgiving is difficult to determine, but they won’t be paying Rohr’s salary, at least.

Rather than turn in his resignation, Rohr penned a letter to his employers explaining his stance.

“I am not quitting. I do not resign however I accept that the refusal to comply with this greedy, immoral request means the end of my tenure with this company,” he wrote. “I hope you realize that it’s the people at the bottom of the totem pole that make your life possible.”

Rohr’s firing set off a barrage of online protests directed at the Pizza Hut Facebook page.
“Apparently making money is more important than allowing your employees to enjoy Thanksgiving with their families,” read one typical post.