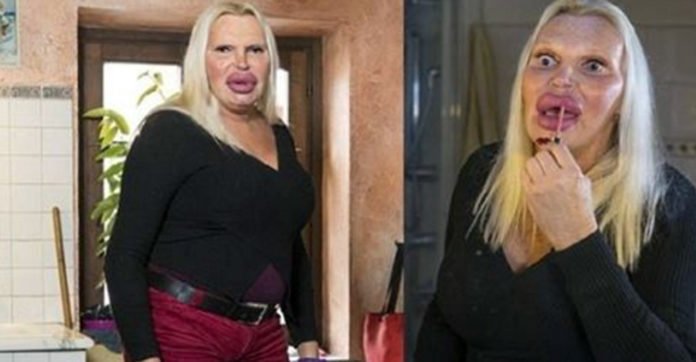 Fulvia Pellegrino, 56, is a transgender woman. She recently spent more than $76,000 to change her body to look like a woman.

According to reports, Fulvia has undergone more than 150 lip and cheekbone fillers, two sessions of liposuction, and four breast implants.

Fulvia was fully supported by her wife, Marisa.

Fulvia was born and named Fulvio. At the age of fifteen, she first started to recognize that she was transgender.

Her family was very religious, and she kept is secret.

Fulvia met Marisa 32 years ago and didn’t even tell her the secret. Marisa and Fulvia got married.

Fulvia started to cross dress in their garage, and she even visited gay bars.

In public, Fulvia was all male. She bought expensive cars and firearms.

It was 16 years ago when Fulvia told Marisa the secret she had been hiding for so long.

Today, Marisa and Fulvia live together and are more like sisters than husband and wife.

Marisa did have to see a psychologist help her adjust.

Fulvia’s family were not accepting and even prevented her from attending her father’s funeral.

Fulvia’s journey began. She started with a round of hormone therapy.

The fillers and butt lift came later. Fulvia no longer works. The couple is barely surviving on Marisa’s income.

Fulvia had to sell all the cars and firearms to pay for her treatments.

Best of luck to you Fulvia, it is important to feel comfortable in your own body.