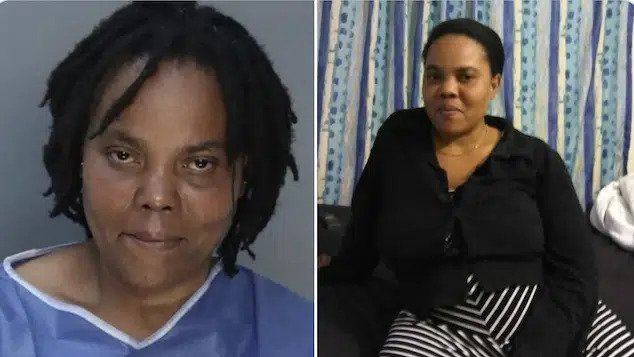 A Miami woman strangled her two children this week, telling stunned cops, ‘I don’t want them anymore,’ and ‘come get them’ according to reports.

Odette Joaossaint, 41, called 911 and hung up several times before officers went to her home for a welfare check Tuesday night, the Miami Herald reported.

‘Come get them,’ she told arriving medics and cops about the dead kids, according to WSVN. ‘I don’t want them.’

First responders found two children tied up and unresponsive inside the home and desperately tried to revive them.

According to an arrest report, Joaossaint admitted tying up the children, ages 5 and 3, before strangling them with a red ribbon.

Odette Joaossaint Miami mother strangles her two kids. Pictured, siblings, Laural Belval, 5, and Jeffrey Belval.
Financial and mental health issues
She later told detectives she was having financial and mental issues and that the children were suffering under her care.

Both kids, Laural Belval, 5, and Jeffrey Belval, 3, were pronounced dead at the scene.

A neighbor told WSVN that the troubled mother sometimes begged her to adopt the kids and said she could not handle raising them.

Their distraught father, Frantzy Belval showed up Wednesday while declining to speak to press.

Frantzy Belval, told the Miami Herald that the children lived with Joassaint full time, although they would normally visit him once a week on Saturdays.

‘They loved me so much,’ the father said. ‘Every week, I buy clothes for the kids.’

The father described Joassaint as an unstable mother who had not worked for a year, and had been begging to move back in with him. The man said he’d consistently refused.

‘I told her, ‘You are crazy. You create too much problems,’’ Belval said.

Of note, Florida Department of Children and Families had gotten involved in the past surrounding issues with the children. The details were not supplied by the agency.