Home » Mom Smells Something Gross When Baby Burps, Looks At Friend In Horror 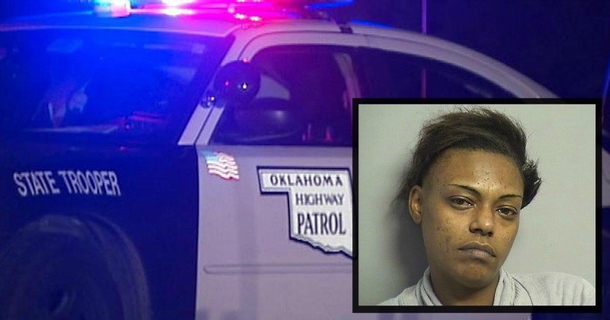 Mom Smells Something Gross When Baby Burps, Looks At Friend In Horror

An Oklahoma mother woke to her baby girl crying while staying over at a friend’s home in Tulsa. She picked the little girl up to calm her down when the baby burped inches from the mother’s face. She was instantly overwhelmed with a disgusting smell that she immediately recognized and caused her to look at her friend in horror.

Monique Bibbs had her 3-month-old daughter in tow when she went to the friend’s house over the weekend for a party. She put the baby to bed, as the adult friends drank until they eventually either passed out or fell asleep. Monique was awoken the following morning, having forgotten to feed her infant, who was now crying for a bottle. However, moments after the 36-year-old mixed the formula and fed it to her, she realized what happened and looked at her friend in horror.

According to KJRH, Monique picked her baby up and went to the kitchen where she used what she thought was water from a container left on the counter to mix the infant formula and fed her baby. After her daughter was done eating, Monique burped her over the shoulder when a sweet stench came out of the infant’s mouth. It was an unmistakable smell of apple vodka, and her baby had just consumed a big dose of it. Her infant was already beginning to act strange, but what the mom did about it made it worse.

Frantic about the accident, she looked at her friend Leo, who was home at the time, and told him what happened as she wondered what to do. Evidently, Monique didn’t think it was an urgent enough matter to take the 3-month-old to the hospital or perhaps she was nervous about the ramifications she’d face for her ridiculous mistake, so she waited until later to seek medical attention when the infant’s systems got worse, according to Corporal Greg Smith.

Smith was called to the hospital after the baby’s blood alcohol level came back as .19, which is much higher than the legal limit of .08 for an adult. Monique is now facing child neglect charges for her infant’s intoxication, but Leo claims it was just a “freak accident.”

Calling it a freak accident takes the blame off of where it needs to be – on the irresponsible mother, who shouldn’t have had her baby at a party house all night or used a random, dirty container left behind as water for her baby’s bottle. That was her first mistake, and not smelling it when she poured it was her second. However, the final and possibly worst was waiting until the end of the day to do something about it. At that point, it’s no longer just an “accident” but willful neglect.

There were so many bad decisions from start to finish, making it evident that this wasn’t a “freak accident.” It was gross negligence. She’s lucky that her baby is expected to make a full recovery, but that doesn’t mean she should get this child or the other two kids back right away.