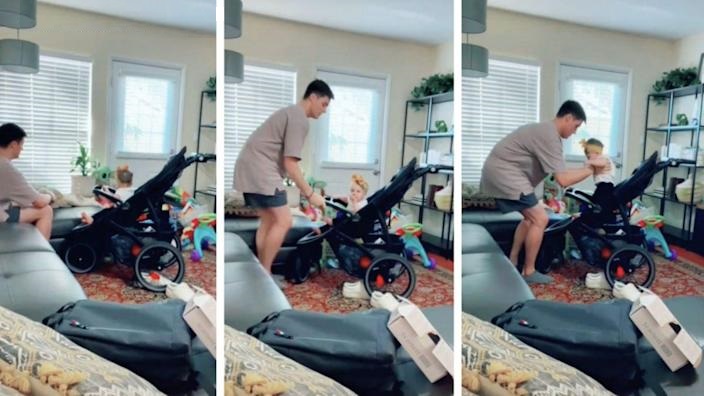 magine your wife coming home from the park where she took your baby for a walk, and then seeing that the baby she brought home is not yours. Would you freak out or would you even notice?

When this TikTok mom switched babies with a friend to see if her husband would notice, she never expected to capture this reaction on camera.

Mom Kat Stickler set out to test her husband’s observation skills by switching out their baby for someone else’s in their stroller.

Kat starts by introducing us to the 2 babies — their own baby girl, MK, and the mystery baby (wearing MK’s bow).

She then wheels the stroller into their living room, where Kat has secretly set up her iPhone to record, and asks her husband, Mike, to get “MK” out.

Mike says sure — then does a double-take at the stroller. He stares for a “hot minute,” as Kat’s on-screen text reads, then declares, with a hint of alarm in his voice, “This is not our baby.”

Immediately, Mike’s daddy instincts kick in, as he both panics about the presumed-missing MK and also gently cradles the mystery baby in his home.

As Mike’s panic grows, Kat quickly rushes in to tell him it was all a harmless prank; that MK is right outside with their friend Sharon, whose baby Kat borrowed for her joke.

Relief immediately floods Mike — and, likewise, comments and likes have been flooding in ever since!

Not only did TikTok users enjoy how quickly Mike realized it wasn’t his baby, they also loved his gentleness with the mystery baby.

“Simultaneously has a heart attack and attends to his non-baby,” said one comment.

“I love the fact that he was still so attentive to the baby while freaking out!” said another.

“The way he picks her up though and still cares is the sweetest,” said another.

Some users remarked that their own husbands probably wouldn’t pass a similar test.

“My husband can’t even tell when I switch our boy girl twins…” said one comment.

Other users didn’t love the prank — or the reactions to it.

“The bar for men is SO LOW that the fact that he knows what his baby looks like is so impressive to us,” one user said.

Another asked, “Anyone else think these ‘pranks’ aren’t funny? He was legit panicking.”