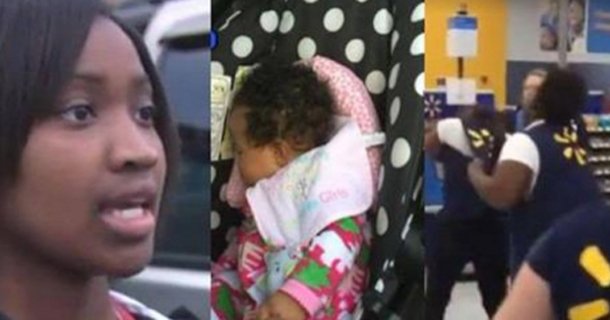 Police are investigating after a woman said that a man in a Walmart assaulted her 4-month-old baby. Quisha Hill of Overland Park, Kansas, had taken her baby shopping when she says a man attacked the child in a checkout lane at the store, according to WDAF.

“I come in to grab a couple items, and while I was at the counter top, speaking with this lady and bagging up my groceries, this random man comes out of nowhere and yanks the car seat out of the cart, has my baby, and he’s like I’m taking the baby, I’m stealing her. I’m taking her. Call 911. Call 911,” said the mother.

The stranger proceeded to choke her child, Hill said. Hill said the baby briefly turned red, but she is expected to recover fully.

Police say that a shopper who witnessed the incident tackled the man and helped to restrain him until authorities arrived at the store. Walmart staff also jumped in to stop the man, according to New York Daily News.

Hill said that the attacker appeared to be intoxicated. He reportedly grabbed the car seat and attempted to put it on his head like a hat.“Our main concern right now is for our customer and her child,” said a spokesperson for Walmart. “We’re appalled this happened in our store and we’re working with police to make sure they have all the information they need.”

Overland Park Police spokesman John Lacy said that while Hill was shaken by the incident, her daughter was expected to be okay.

“She was just happy that there were bystanders and security guards to help subdue the man,” said Lacy.