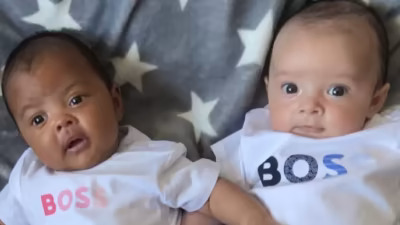 A mum from Bulwell, who gave birth to unique twins with different skin colours, says she feels “upset” after seeing a social media comment saying “the dark twin will be stopped by the police”.

Chantelle Broughton, who gave birth to non-identical twins at Nottingham City Hospital in April, told ITV’s Good Morning Britain: “As the twins get older we will have to think about them potentially having different experiences to other people.”

Her son Ayon was born with fair skin and green eyes, meanwhile her daughter Azirah had dark skin and brown eyes.

Ms Broughton told ITV: “I’ve seen a comment online to say ‘the dark twin will be stopped by the Police’ – it made me feel upset.”

She added: “I have previously spoken to my eldest daughter (11) to talk about what she can do if she faces racism at school.

“My partner experienced racism at secondary school and it was heartbreaking.”

“I hope that if we teach them about other religions, skin colours, that they will be able to handle it,” she adds.

Mum Chantelle says she looks white but is mixed race due to having a Nigerian maternal granddad – while dad Ashton is half Jamaican and half Scottish.

There is a one in 500 chance that an interracial couple will have twins with different skin colours, according to population geneticist Dr. Jim Wilson from the University of Edinburgh as reported by the BBC article in 2011.

The family say they have mostly had positive encounters with people, but they have been stopped a few times by members of the public, who have questioned if the children have different dads.

Now the twins are five months old, Chantelle says the pair’s complexions contrast more than when they were first born.

She said: “Some people said they’d change but I don’t think they will, they are just going to stay the same complexion.

“As time is going on she seems to be getting darker and darker. I think their hair will be different too.”

She said: “The girl will have thick and curly hair and the boy’s will be completely different. You can already feel the difference in texture.”

She said dad Ashton, a 29-year-old construction worker, jokes and asks about them being the delivery driver’s children. Ashton said Ayon and Azirah are also different in terms of personality.

“She’s quite chilled and laid-back while he’s a bit needy,” he said. “He doesn’t like to just sit there while she’ll just lay back all chilled.”

Professor James McInerney chair in evolutionary biology at the University of Nottingham’s School of Life Sciences, said: “The twins are not identical (monozygotic) twins.

“Therefore, they have different genetics – they are as closely related to one another as two siblings.

“This means they share 50% of their Alleles (an allele is a kind of gene – a specific sequence of DNA).

“There is a major gene that is part of a biochemical pathway that changes the amino acid tyrosine into either eumelanin or phaeomelanin.

“Eumelanin is darker and brown, while phaeomelanin is lighter and blond/red. Perhaps alleles for this particular gene are involved and this might make the result look more apparent.

“It probably feels quite unusual because they are twins, but in reality it’s not so unusual.”