Home » Neighbors Find Kids Running Outside With No Shoes Or Coats On. When Cops Try To Wake Mom And Dad, It’s Obvious What They’ve Done 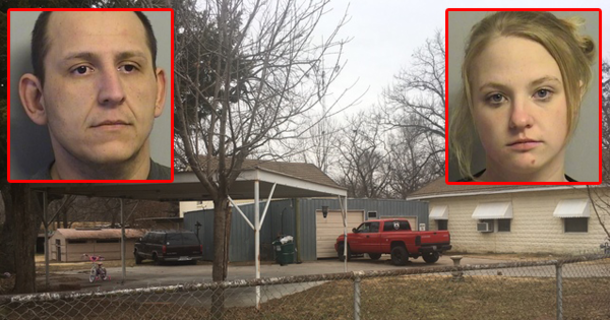 Neighbors Find Kids Running Outside With No Shoes Or Coats On. When Cops Try To Wake Mom And Dad, It’s Obvious What They’ve Done

A mother and father in Oklahoma are facing serious charges after their children were found running around outside without shoes or coats on.

According to KJRH, several residents in the Tulsa neighborhood immediately became concerned and ran outside when they realized that a 3-year-old girl and 4-year-old boy were playing in the street with no adult supervision.

It was just 30 degrees outside that day, but the two young siblings were reportedly playing without shoes or coats on.
Neighbors immediately called the police, who took the two small children into their custody and went to check on the parents.

According to KJRH, when authorities walked inside the house, they found the children’s parents, Matthew and Stormee Brown, sleeping.

“They were heavily sleeping. We were calling out that we were police and the sheriff’s department and they didn’t hear us until we shook them,” said Cpl. Eric Anderson, with the Tulsa County Sheriff’s Office.

Police later revealed that the couple had surrounded themselves with plenty of drug paraphernalia, which led investigators to believe they may have been taking methamphetamine before they passed out.

Since the children have been taken out of their care, the Browns are currently facing both child neglect and drug charges.