Home » Nobody could see the injured woman after her accident, then a strange dog shows up and does the unthinkable 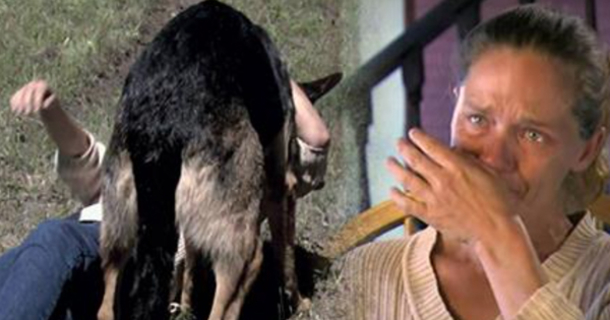 Nobody could see the injured woman after her accident, then a strange dog shows up and does the unthinkable

This story will touch your heart, and it just goes to show you, heroes come in all shapes and sizes. Shannon has her life to thank for an unlikely hero — a dog.

Shannon Lorio, a 36-year-old Georgia resident, decided to go for a drive after an argument with her husband. She admits that she was speeding when she lost control of the car around a steep curve, and she got trapped in her own car. She was off the road and worried that passersby couldn’t see her car there. The situation became dire when she lost consciousness.

When she woke up, there was a big dog standing over her.
She says, “I was bleeding from my face and my nose. All of a sudden, I felt a presence, a really huge presence. He was straddling me.”
The dog pulled her from the ditch, and dragged her about 50 yards into view of the road!

“This dog, he did everything. He’s an amazing animal, he really is. I honestly believe, in my heart, that if he hadn’t have, I probably wouldn’t be here today. I really wouldn’t. I think I honestly, I would have died. I really do. I’m glad I didn’t,” Shannon later recounted.

That dog was later named Hero and is responsible for saving her life. It turned out that he was a stray dog with a big heart but no home. Now he’s actually been certified as a rescue dog. It’s an incredible story of Man’s Best Friend.

Watch the video for the whole story!