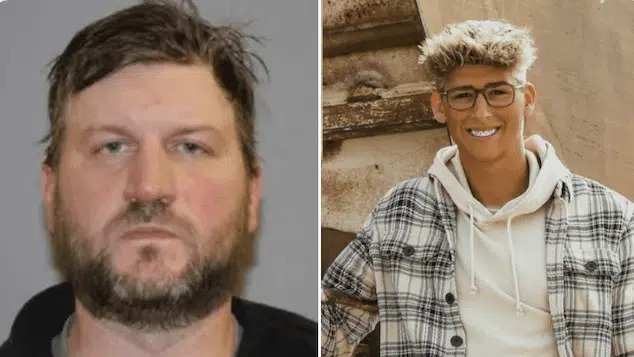 A North Dakota man has admitted to intentionally hitting and killing a teen boy with his car following a political dispute, claiming the boy was part of a Republican ‘extremist group.’

Shannon Brandt, 41, killed 18-year-old Cayler Ellingson early Sunday in McHenry with an SUV in an alley, KVRR-TV reported. He is charged with vehicular homicide and leaving the scene of a deadly accident.

Court documents stated Brandt telling a 911 dispatcher the teen was part of a Republican ‘extremist group’ and was calling some people he was afraid they would go after him following an unspecified political argument.

Ellingson was later pronounced dead at the hospital in Carrington.

🚨 41-year-old suspected killer Shannon Brandt, who admitted to hitting 18-year-old Cayler Ellingson with his car over the teen’s conservative views, was RELEASED yesterday on $50k bond. Brandt has been charged with vehicular homicide and leaving the scene of a deadly accident. pic.twitter.com/ulWpwOa5CN

The teen victim’s mother, Sheri Larson Ellingson told police her son called her before the crash, asking if she knew Brandt. She said she did but that she did not believe her son knew him. Cayler then asked his mother to come and pick him up, only for the son to be was killed before the mother could arrive.

Not immediately clear were Brandt’s, if any, political affiliations.

Upon Brandt fleeing the scene, he was arrested at his home in Glenfield.

He was booked for DUI after testing above the legal limit to drive and has since been charged with two felony counts of criminal vehicular homicide and duty in accident involving death.

He is set to appear in court on October 11.

A family friend of the mother has raised a GoFundMe account for Cayler Ellingson’s funeral expenses. ‘I would like to set a goal to help Sheri, Cole (husband) and Chase (second son) with Funeral expenses and anything to help them through this whole grieving process,’ read the GoFundMe account. ‘Please lend a helping hand to help this family in such a huge and tragic loss of Cayler.’

Welcome to a brave, divided America…