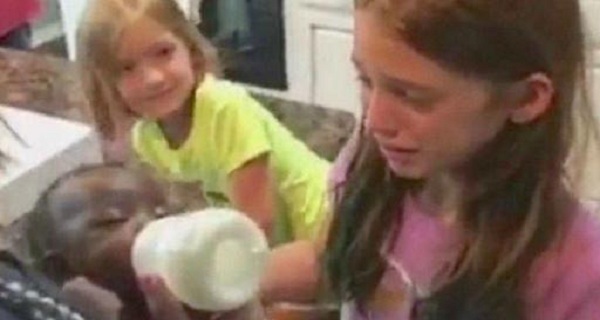 With two biological daughters and two adopted sons, Kasi and Shane Pruitt wanted nothing more than to have a fifth child.

The kids knew their parents were trying to grow their family, but anyone who has been through the adoption process knows it can be a long and arduous one. Kasi and Shane’s kids were constantly asking them if and when their new sibling was coming home … and they were not-so-secretly hoping it would be a sister.

After 10 months of hard work, lots and lots of phone calls and paperwork, and endless nights spent hoping and praying, Kasi and Shane finally got the news.

It was on a Tuesday night when the couple received the call. Their secret adoption had gone through, and they were officially going to be the parents of a brand-new baby girl.

The next morning, they met with their lawyer and the birth mother.

But here’s the thing: The kids had no idea.

Kasi and Shane had wanted to keep the adoption a secret, just in case it fell through. But in the end, they said it all ended up happening so fast. They really had no time to explain, anyway!

Shane recorded the tear-jerking moment that Kasi carried their newest family member into their home, much to the surprise of their family.

Meanwhile, 6-year-old Harper and 11-year-old Raygen had no clue they were about to meet their little sister for the very first time.