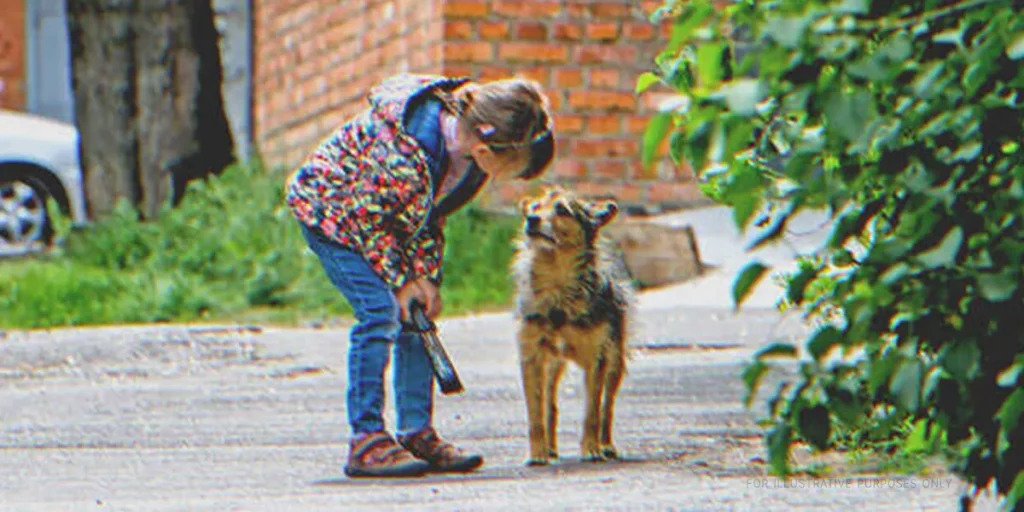 A little girl shelters a sick stray dog and takes him to her tent, where she lives with her poor mother. A month later, the dog escapes to a mansion, and the girl chases him, oblivious to what awaits her.

Eight-year-old Lily never played with dolls, wore pretty outfits, or ordered pizza on Saturday nights like her friends. Instead, after school, she sat by her mother, Stella, and helped her knit sweaters and caps because that was how they made a living.

When Lily was five, her father, Adam, died of cancer. Stella was an orphan, and Adam’s family refused to help them, so Stella and Lily were on their own.

“God rewards those who are kind and brave. We’ll be alright, honey,” Stella told Lily every night before going to bed. Deep down, she was devastated after losing Adam, but she had to pull herself together for Lily.

After Adam’s death, Stella struggled to make a living and lived in a tent in a parking lot with Lily. Their previous landlord had increased the rent, and Stella couldn’t afford it. In fact, she hadn’t been able to pay the rent for three months before the landlord eventually kicked them out.

Homeless and with no savings in hand, Stella and Lily were forced to live in the tent. They had set it up in a deserted parking lot so that they wouldn’t be kicked out, at least not anytime soon.

One day, Lily was walking home from school when she felt somebody was following her. She got scared and was about to run away when she heard a sad “woof” behind her. Lily turned around to see a whimpering sick doggo, muddy and drenched in dirty water. He was looking at her with sad eyes.

“Are—are you hungry?” Lily asked him, and he let out a slight woof as if he understood what she said.

Lily sat down and began petting him. “Listen, doggo, you look sick, and mommy and I don’t have enough money. We can’t take you to a vet, and well, mommy, she will be mad. I am sorry I can’t help you!” she decided.

But when the dog began whimpering in her lap, Lily’s heart melted. “Don’t be sad, silly! Mommy says we should be brave. Ok, ok, let’s get you home,” she said. “But I don’t think mommy will let you stay there.”

So Lily brought the dog to the tent, although she and Stella couldn’t afford another mouth to feed.

God always helps the kind and brave.
“You know our circumstances, honey,” Stella told her once she bathed the dog and gave him some milk. “We can’t keep him. He has to leave!”

“But, Mommy, isn’t the dog just like us?” said Lily. “You remember when daddy died, we had no one to help us, and we were also like the doggo. Can we please help him, mom? I will spend more time knitting so we can make more money.”

When Lily said that, Stella couldn’t refuse. She looked at the helpless creature, and her own tragic life flashed before her eyes.

Later, Stella made the dog a tiny bed out of a shoe box and a house with cardboard, which she placed outside the tent. And while she was against keeping him initially, a month later, she couldn’t imagine her life without him.

Sam, as Stella named him, became family to her and Lily. He would follow them everywhere they went and never left his place without permission. Moreover, he kept Stella company when Lily would be in school.

But one morning, when Lily and Stella came out of the tent to feed Sam, he was nowhere to be seen.

“Sam! Come and have breakfast!” Stella called out to him, looking around, only to be disappointed.

“Are you hiding there, boy? I told you not to bother Mommy!”

Lily looked behind the tent for him, where Sam occasionally hid, but he wasn’t there either.

“Mommy, maybe he ran to the park! I’ll go check it out!” she told Stella, who nodded. “Sam never leaves like this! Be careful, honey.”

But Lily checked the park and couldn’t find Sam. She was sobbing on her way back to the tent. “Did someone take Sam away from us? Did someone steal him?” She couldn’t stop crying.

Suddenly, she noticed Sam across the street. “Sam!” she shouted.

The dog looked back, then turned away and started running. “Oh no! Sam! Wait for me!”

Lily followed the dog and was shocked when he ran to a mansion. “Sam!” Lily followed him inside, not knowing what awaited her.

Soon after, she spotted Sam in the garden, jumping on a man in a wheelchair and licking his face. The man was so old! And Sam seemed to love him!

“Sam?” the old man suddenly asked, and Lily looked at him with huge blue eyes. “I am sorry, sir. Sam seems to like you, but I don’t want to bother you. I apologize on his behalf,” she said.

The old man started laughing, “And who are you, little miss? By the way, I’m Daniel, and this is my dog, Humphry.”

“Your dog?” Lily asked sadly. “But I—I found Sam on the streets…”

“I’m sorry to hurt you, miss. My wife kicked Humphry out of the house after I was hospitalized three weeks ago. She was evil,” he whispered. “I’m glad Humphry came back, and my wife left this house. I was so alone without him.”

Daniel smiled. “Did you move to this neighborhood recently? I don’t think I have seen you around before.”

The little girl shook her head. Then she began telling him how she and Stella lived in a tent, knitted sweaters for a living, and struggled to make ends meet.

“I think I should go home now. My mommy must be waiting for me…” She waved a hasty goodbye to Daniel, hugged Sam/Humphry for one last time, and walked back to the tent. Lily never thought she’d be meeting Daniel or the sweet dog again.

But the next day, an expensive car pulled right outside their tent, and Daniel visited them. He was in a wheelchair and behind him was his caretaker.

“You must be Daniel! Lily told me about you!” Stella cried. “Is Sam ok?”

Daniel gave her an encouraging smile. “He’s fantastic. Thank you for looking after him. I have come here to thank you. Would you like to work for me?” he offered, and Stella’s eyes widened in surprise. “Lily told me about the issues you’ve been facing, and I thought I could help.”

“That—That is very kind of you, but I—I need some time to think about it…”

“Take your time,” said Daniel, smiling. “In the meantime, you can have this…” His helper gave her an envelope. “I’ll be waiting for your answer.”

After Daniel left, Stella opened the envelope and found $10,000, along with a note.

“Thank you for looking after my best friend. I can’t thank you enough for what you’ve done for me. Let me know what you think about the offer.”

Stella had tears in her eyes, and she accepted the offer because something about Daniel told her he was a kind man. Later, Stella learned Henry’s ex-wife was just after his money, and he had divorced her after he found out how she mistreated Humphry/Sam.

Stella and Lily moved into Daniel’s mansion, as per his request, and they became family to him. Lily could now spend time with Sam, and she was just too happy to have him and Daniel as friends.

Thanks to Lily and Stella, Daniel lived the last few months of his life surrounded by love and happiness. He was suffering from cancer and passed away two months later. After his death, Stella and Lily inherited his home and pet dog, Humphry.