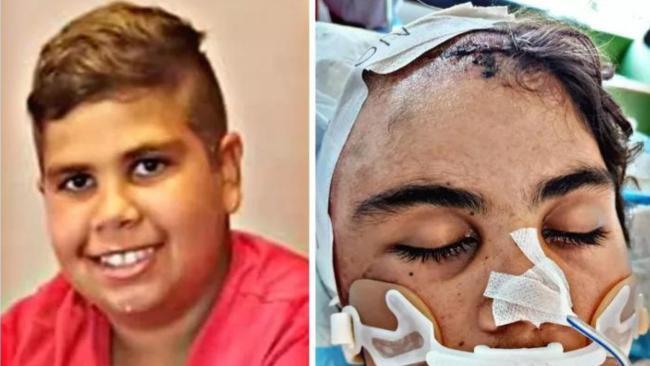 “It’s the words the country has been waiting for,” Noongar-Yamatji woman Mechelle Turvey told mourners at a vigil held for Cassius in Perth. “It’s like you’re on the same page as our hearts.”

The Prime Minister told media on Friday: “This attack, that clearly is racially motivated, just breaks your heart.”

“We are a better country than that, and my heart goes out to the family and friends.”
Cassius’ death is “bringing the community together”
The Noongar teen was walking home from school at around 4.30pm on October 13 when he was allegedly beaten with a metal pole, believed to be a shopping trolley handle.

Cassius was rushed to hospital with head injuries and placed in an induced coma but died eight days later from his injuries.

Jack Brearly, 21, has been arrested and charged with murder and is due to face court in Perth in the coming month.

Police say the man allegedly pulled up in a black Ford Ranger utility after the schoolboy and his friends had gotten off the bus, exited the vehicle and ran towards them, allegedly beating Cassius.

Additional charges of aggravated assault occasioning bodily harm and stealing were added by police on Friday after it was alleged Brearly assaulted a 13-year-old boy who was with Cassius and stole his walking crutches and cap.

Speaking at the gathering at Midland’s Weeip Park, Mechelle said Cassius’ death wasn’t just a loss for her, but a loss for everyone, even those who didn’t know him.

“This is the worst thing to happen, but this is just amazing, it’s just bringing community together,” she said, according to Nine News.

“This is black and white, you can see the diversity of people here.”

Vigils were organised around the country at the weekend with more planned at the start of November.

“Terrifying” that children can’t walk home from school
Comments made by WA Police Force Commissioner Col Blanch were criticised last week after he said Cassius’ death appeared to be a result of him being in the “wrong place at the wrong time”. He also said in the interview with 6PR, police weren’t operating on principles of racism, at that point in time.

In a meeting held last week, Indigenous leaders said this commentary from police was hurtful to the wider Aboriginal community.

“He was coming home from school. How on earth could he be at the wrong place at the wrong time?” Noongar traditional custodian Jim Morrison said, according to ABC.

“For me to think that children can’t walk home from school … that is terrifying.”

Premier Mark McGowan echoed the warnings of police, saying the matter was before the courts and it was that process that would decide those types of things.

“You don’t want to intervene in these things. You’ve seen something happen over east today whereby people say or do something they shouldn’t, and trials are abandoned.

“I’m not going to do that, so I’ll just say, a beautiful kid, a terrible tragedy, a family that’s grieving, let’s let the law run its course.”