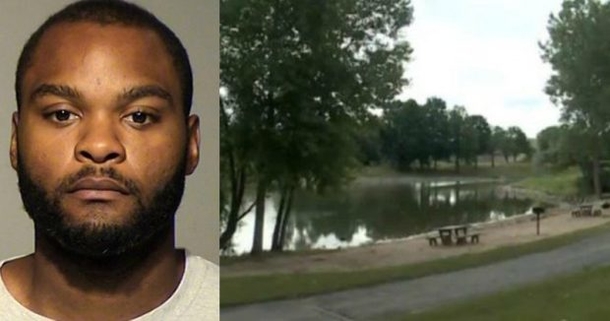 After hearing an unusual sound late at night coming from a nearby pond, a resident at the neighboring apartment building went to his window to see what was happening. He saw a man wading the water moments before realizing what he dragged to the shore.

Describing it as “one of the most evil things I’ve seen,” Robert Amstadt wasn’t prepared for what he was about to witness when he walked to his window. Sean A. Flowers Jr. had been at a family reunion in the same Milwaukee, Wisconsin apartment building earlier in the evening, when things went horribly wrong. However, what a “hornet’s nest” of bystanders did about what they watched was worse.

Flowers had a rocky relationship with his girlfriend who is also the mother of his 3-month-old son. The woman had filed a restraining order against her violent boyfriend, but that was dismissed after she didn’t show up for court on it. Not that a piece of paper would have stopped what happened on July 30, but not ignoring the obvious anger issues would have helped. The parents got into a fight, and Flowers took retaliation on their infant son in the most horrid manner he could come up with in his fit of rage.

Amstadt said that he heard a baby crying and looked out when he saw Flowers walking into the water with his baby, before dunking him and holding the screaming infant underneath. “That baby cried all the way out into the water,” Amstadt told the Journal Sentinel.

“Then the crying stopped.” Flowers “didn’t try to hold the baby up” out of the water, he explained. Then, another man came up behind the father.

“And then I saw a baby floating in the water.” Griffin tried to grab the baby to rescue him, but Flowers grabbed the infant back and went further out to ensure he could kill his kid. It was too late before anyone could get to him, as the next thing bystanders saw was Flowers dragging his dead infant to the shore. “No matter what you do, no matter how hard you try, sometimes you just lose,” Griffin said in despair as the only one in a swarm of people who did anything to stop the dad from his son’s demise.

As people whaled at the site of what was happening in the water, Griffin was the only person brave enough to jump in and to try to stop it. Although police arrived quickly, it was too late once they got there, as the baby was already dead. “I just can’t imagine what was in that man’s head. I just can’t imagine. I’ll never be able to figure that out. It’s just wretched,” Milwaukee Police Chief Ed Flynn told WITI.

Flowers was arrested and charged with the intentional drowning of his son. Residents who watched remain in shock, unable to shake the site from their memory. Perhaps there is a twinge of guilt for not attempting anything to stop it. While the crime is solely the responsibility of the father, the reaction from the onlookers is representative of the passive society we live in today, where so many people are more concerned about themselves than saving a baby’s life. Bravo to Griffin for being the exception to the group.