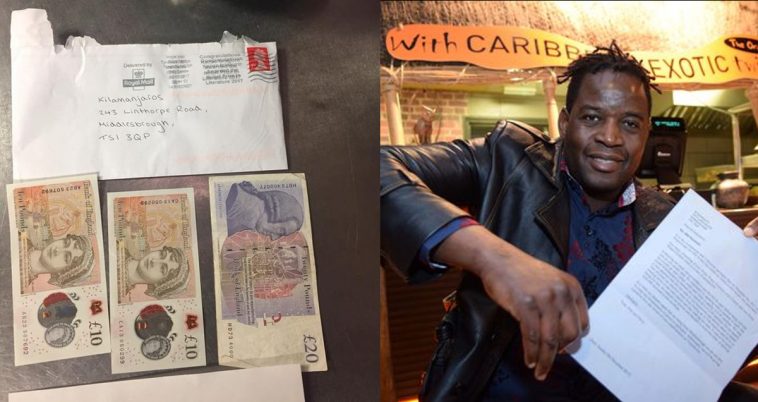 Everywhere you look these days, there are stories of heartbreak and misfortune, so it is great to find a story that restores your faith in people and puts a smile on your face.

This definitely counts as a feel good story. A simple day in which three people were able to prove that most of us are basically good.

Three friends went out for dinner one night, deciding to dine at Kilimandjaro, located on Linthorpe Road in Middlesborough, England.

After they enjoyed their meals of Waka Waka chickens (two with cheese), they got ready to leave and attempted to use a debit card to pay for their meal. Unfortunately, Kilimandjaro doesn’t accept that form of payment.

The only option the guys had was to leave the establishment to find an ATM so they could withdraw the cash and return to settle their dinner bill.

After telling an employee of their plan, they left in search of a teller machine.

During their search, they realized that it was time for the last train of the night that could take them home, as they lived in another town. They barely had time to run for the platform and catch it.

Back at Kilimandjaro, owner Apollo Apollinaire, realized the men were not returning, and chalked it up as a loss. He instructed his employees to make sure someone stayed behind or at least left something of value with the restaurant if a situation like this happened again. He said that most of the time, a whole party would not have left like that to look for the machine together.

On the ride home, the men realized that in their frenzy to catch the train, they neglected to take care of the bill at the restaurant.

This could be where the tale ends. The three guys could have just gone on with their lives, not caring that the owner of the place where they had such a nice meal had been stiffed.

But the story doesn’t end there.

A few days later, Apollo received a letter at the restaurant from the three accidental dine and dashers. In it, they explained what had happened and they apologized for not returning to pay. They included the cost of their meal, plus a bit extra for a tip. The cherry on top was the promise of a five star rating on Trip Advisor.

Isn’t is heartwarming to know that people actually do the right thing? Apollinaire was so pleased to realize that they had done the right thing and that the whole situation happened with no ill intent. He said he didn’t think people like that still existed.

He was disappointed that they didn’t give a return address, but he did make a post about it on the restaurant’s Facebook page, and it quickly went viral. People loved seeing a good story.

The comments on the post revealed that people love when things work out like this. One stated that the world needs more people like this, while another said their faith in humanity was restored.

I think most of us genuinely try to do the right thing from day to day, but with all the hate and scary stuff going on in the world today, it sure is nice to read about something so good.

Good for those three young men for making things right, and not leaving the establishment hanging. Now I need to go find out what Waka Waka chicken is.