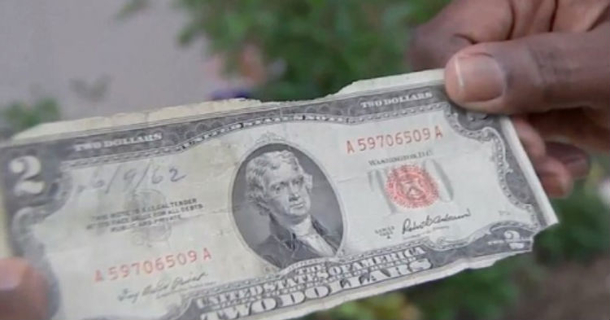 When an eighth-grade student at Christa McAuliffe Middle School in Houston, Texas bought her lunch, the school called the police on her. Danesiah Neal had done nothing wrong, but the administrators at the school looked upon her as if she was a criminal. What did she do? She bought her lunch with a $2 bill her grandmother had given her.

Although Danesiah had never been in trouble with the school before, they immediately sent her to the principal’s office for using the $2 bill. While that was bad enough, the punishment for the innocent teen did not end there. The school principal scolded the girl, confiscated her money and then called the police.

Danesiah couldn’t believe what was happening. She had never done anything wrong before and was scared when she was escorted to the principals’ office.

After the young girl was handed over to the police, school officials called Daneisah’s grandmother, Sharon Kay Joseph and grilled her.
Joseph remembered the administrators asking her, “Did you give Danesiah a $2 bill for lunch?’ He told me it was fake.”

Felony forgery charges carry up to 10 years in prison. For a nice old grandmother, this was scary business. And for a young student like Danesiah, it would forever stain her perfect reputation.

Police funneled their resources into the investigation. They went back to the convenience store that gave Joseph the $2 bill. There, they quickly determined that the $2 bill from 1953 was indeed real.

Because the bill was minted in 1953, the school’s counterfeit pen did not work. Instead of using their brains, they tried to arrest the middle schooler. Fortunately, no charges will be filed against the innocent girl and her kind grandmother.

“He brought me my $2 bill back,” Ms. Joseph said. “He didn’t apologize. He should have, and the school should have because they pulled Danesiah out of lunch, and she didn’t eat lunch that day because they took her money.”

“It was very outrageous for them to do it,” Ms. Joseph said. “There was no need for police involvement. They’re charging kids like they’re adults now.”

It seems school administrators and Houston police did not know that the $2 bill was a piece of currency.

Because of the school’s ridiculous allegations, this young lady had to deal with an extremely stressful situation. If they had only listened to her – or simply done a Google search – they would have known that $2 bill were real tender. Instead, they called the police on a girl who had never done anything wrong in her life.

Should the school get away with this? They wasted the police’s time and wrongfully accused an innocent girl.
Do you know about the $2 bill? Have you ever seen or used one?

Please SHARE YOUR THOUGHTS in the comments below now!