Home » She Spots a Pregnant Homeless Woman Begging For Money. But Then She Sees The UNTHINKABLE Truth! 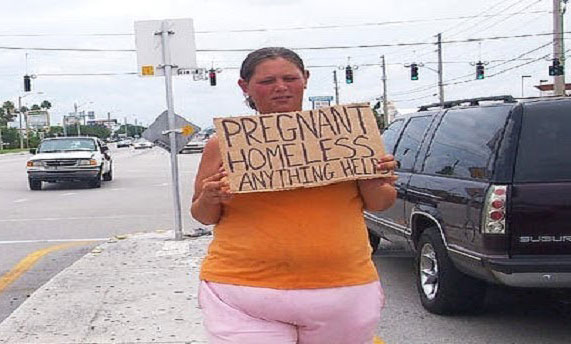 She Spots a Pregnant Homeless Woman Begging For Money. But Then She Sees The UNTHINKABLE Truth!

At any given moment across America there are over half a million homeless people. Some live on the streets, others in their cars or at temporary shelters, but no matter where they stay, all of them struggle to get by. While all major cities have a homeless population, warmer, more dry areas have higher concentrations because it’s much more comfortable than cold wet places. The weather is what primarily makes California such an attractive location for homeless people, the wealthier residents also factor in heavily.

Melissa Smith, who lives in San Diego, California, was used to seeing people begging on the streets whenever she visited the local shops. Even so, there was one woman who caught her eye one day. She was pregnant and holding a simple sign that said, “Please Help,” while a young boy, likely her son, sat next to her. Every time Melissa went to the Eastlake Plaza Center to grocery shop, they always stood outside begging in the hot sun, rain or shine, and she couldn’t help but feel bad for them.

Oftentimes Melissa would see other people bring the woman and her son food and drinks and many passersby would hand them money. While she never gave them any cash herself, Melissa did keep a close eye on them. One day she noticed that they were not in their usual spot at the shopping plaza.

This made her worry a bit, but she had to get gas and so quickly forgot. As she was filling up at a gas station across the street, she suddenly noticed the woman and her son walking across the parking lot. A Mercedes Benz pulled up beside them with a man driving and the woman got in the front seat, put the little boy on her lap, and they drove off.

Melissa could not believe what she was seeing and decided to follow the car. She took pictures and documented everything. They ended up driving over to another shopping center and the woman got out and started begging again with her son by her side while the man drove off and parked nearby. At this point Melissa knew exactly what they were up to, scamming the public, and so she got out of her car and continued taking pictures.

When the woman saw her, she got very angry and picked up a large rock which she hoisted over her head as she went towards Melissa. At that moment all Melissa could think was ‘should she be doing that if she’s pregnant?’ but thankfully other eyewitnesses called the police. When the beggar found out that the cops had been called, she grabbed her son and left as soon as possible.

However, Melissa had managed to get the license plate number and she handed over her video footage to a local TV station. They ran the plates and found the car was registered to a woman, but the address associated with it was a dead end. Apparently, the couple who had lived at the $2500/month apartment had just picked up and left and already a different person had moved in.

When a reporter at the station named Emily Valdez got a tip on the woman, she confronted her at a grocery store where she had been begging once again. This time she had a baby in her arms and when asked if she was the woman in a photo Melissa had taken, she said, “No speak English” and then ran off.

Later on, a private detective decided to look into the case and discovered something even more sinister than anyone had expected. The woman may have been part of an organized crime ring where women and children are forced to beg all day in exchange for food and shelter.

They don’t get any of the money they collect, instead it goes to the people who run the scheme and their children don’t go to school either. As for being pregnant, many of the women are not, instead they use fake bumps because it makes them a lot more money.