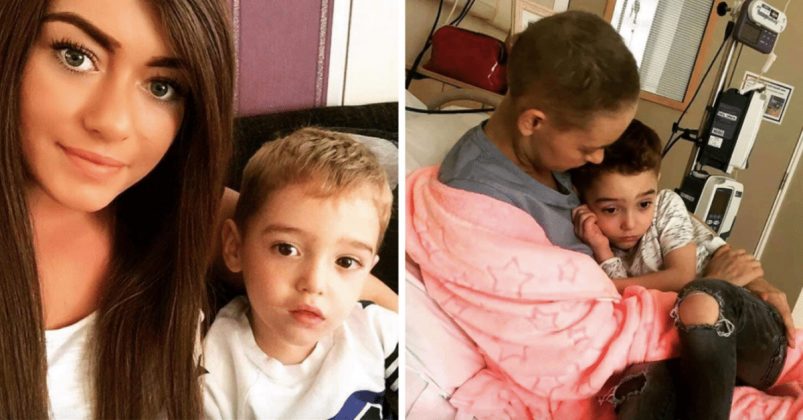 As a parent, you’d do anything to protect your child from any hurt or pain.

You’ll try your best to shield your child from a loss, especially if it’s the death of a loved one really close to the little boy or girl.

But when a young and single mom found out she had little time left here on earth, because she was battling a rare form of cancer, it was heartbreaking and hard for her to tell her 6-year-old son that she will soon be gone.

Naomi Knighton, 26, has had two bone marrow transplants so she could have a better chance of fighting an aggressive form of leukemia.

However, following her last operation, the doctors gave her an unfortunate prognosis — she had to prepare for the worst because the cancer was winning. Naomi’s first thought was how to gently break the bad news to her 6-year-old son, J’varn.

Her relatives, however, have eased up the situation a little bit because they have told the boy of his mother’s condition.

According to Naomi’s sister, Kirsty, J’varn seemed to have taken the news that his mother was dying rather well.

Perhaps it helped that he has seen how his mother has been very sick. Perhaps that prepared him for the worst as well.

There is some sadness in the boy’s eyes when he visits his mother at the hospital.

J’varn, however, was generally coping but they know that they will have to do something when the inevitable happens. Kirsty said that cannot believe Naomi is no longer going to be around.

Everyone thought she would pull through this harrowing situation since her sister was a fighter and was emotionally stronger.

She had no problem getting bone marrow donors but those efforts couldn’t also save her too.

Naomi found out she had cancer as a teenager.

Doctors told her she had chronic myeloid leukemia when her mother noticed how quickly she would have colds and coughs, as well as a throat infection. So, they went through tests and check-ups to see what was wrong with her.

Doctors said that her cancer is the type that impacts the white blood cells and it is a progressive condition.

Doctors actually gave a choice that ended up with the same results.

They could give her treatments to extend her life or they could giver medication to ease up the pain and weakness in her body.

Just the same, however, the treatments to extend her life won’t give her much more time since the cancer is very aggressive.

However, Naomi opted for the first choice because she needed to buy more time to be with her son. In the meantime, the family has set up a GoFundMe page to fund Naomi’s funeral expenses.

The dying mother said she wishes for a party-style funeral, where people will not be grieving her death but celebrating her life.

She also wishes to have a nice white tombstone so that it’s what her son sees each time he visits her at the cemetery.