Home » Tearful Young Woman Throws a Bill to a Beggar, He Unfolds It and Sees an Inscription: ‘Help Me’ 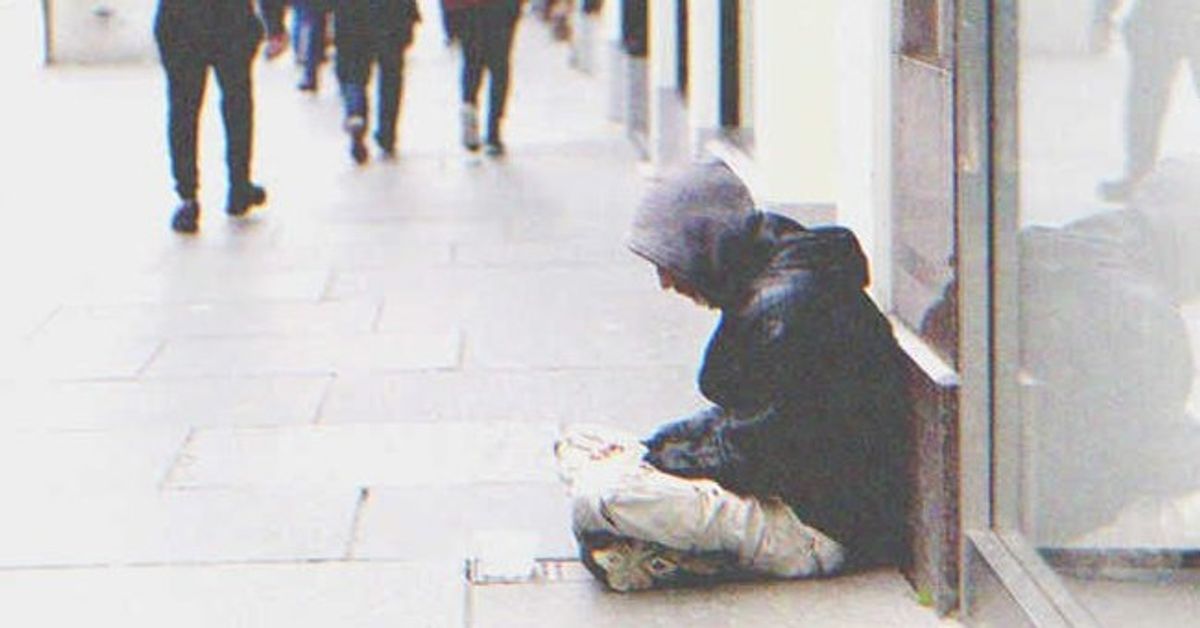 Tearful Young Woman Throws a Bill to a Beggar, He Unfolds It and Sees an Inscription: ‘Help Me’

While begging on the street, Jack received a $20 bill from a young woman in tears. He thought it was strange until he looked at the money and saw a message asking desperately for help. He knew he had to act and shockingly jumped in front of the car.

Jack was begging for money on the streets of Miami as he always did. He had been doing that for years, and some people even knew his name. Some folks gave him food and a few bills, and he was always grateful.

Many years ago, his life took a horrible turn when he was first married to Lilian. His work got stressful, and Jack took solace in a bottle of whiskey every night. It eventually turned into an addiction, and Lilian kicked him out of the house. She divorced him, taking everything, and he lost his job too.

Years later, he was still on the streets because his addiction drove him mad for a long time. A few months ago, he had finally kicked the habit and wanted to get better. But his drinking habit resulted in losing all his friendships and family connections. It was a nightmare of his own making, and now, he had to crawl his way out. But he needed to gather as much money as possible from the few things people gave him.

Suddenly, a scene on the street drew him away from his thoughts. A scowling man in a suit was dragging a young woman with tears streaking her lovely face. They were followed by two other men with equally serious expressions, and Jack thought it was strange. But then the woman turned to him and dropped a crumpled bill in the cup he always had in front of him.

“I hope you can do something good with this money,” the woman said and was pulled a little harsher by the man, who never even looked down.

Another car showed up, and he was shocked to see a familiar woman emerge from it.
Jack thought her message was particularly odd and didn’t know why she would give him money when she was obviously in some sort of trouble. But something in his head or heart told him to grab the bill and he noticed a hint of red on it. He straightened out the $20 bill and discovered some shocking words written on it.

It was written in lipstick, and it was all smudged, but Jack could understand it perfectly. As he stared at it, he heard a car engine roar and looked up in time to see the man pushing the young woman into the car. Something was not right. This was not just a case of an angry boyfriend. It was something way more severe.

Jack stood up rapidly but had no idea what to do. He couldn’t yell at people to stop the car because no one would listen to him. Without further thought, he ran towards the car himself and jumped in front of the hood. The car drew to an immediate stop, and Jack fell off the hood toward the gravel. It hurt like hell, but he successfully stopped the car.

The driver got out and yelled, “What the hell, man?!”

Jack heard a woman calling 911 and telling them that a car had run over a man. Police are coming, that’s good, he thought and stayed on the ground to stop the vehicle from leaving at all.

“What’s going on, Jenkins? We have to get moving now!” the man who was dragging the girl got out and yelled at the driver, who explained everything. “Get up from the floor, you bum! We have business to get to!”

Jack knew he needed to stall to give time for the police to get there so he pretended some more and started swaying on the floor, moaning in pain to keep up his charade. Finally, he heard the sound of a siren. A cop car showed up, and one of the officers got out to check on Jack.

“Sir, are you ok?” the cop, a woman, asked after leaning over him.

“Yes, but there’s a girl in there who needs help. I don’t know what’s happening, but the men in that car look like kidnappers,” Jack told the officer as quietly as he could so the evil men wouldn’t hear it. The woman frowned at him but looked back at the car and said something to her mobile radio.

She stood up and walked towards the car, using her flashlight to shine a light inside. She saw the woman and requested she get out.

But the man in a suit spoke up, “That’s not necessary. This idiot jumped on top of our car for no reason. We really needed to go.”

“Please, everyone, get out of the car right now,” the officer repeated, and her partner came over to check on things too.

Jack saw the young lady get out, holding herself steady. The cop asked her something, but the poor girl was too scared, so he decided to speak up right then. “Tell them, girl! That’s the help you wanted!” he yelled towards the girl, getting up at last.

The girl looked at him, and her eyes widened. “Yes!” she breathed loudly. “Officer, these men have kidnapped me, and I think they’re planning to sell me.”

The men tried to get to the girl, but both officers pulled their guns out, so they were forced to stay back. Good, the evil men were not armed, Jack thought in relief.

The cops called for backup and several other squad cars showed up, and they arrested the men. They questioned the girl, and she asked someone for a phone to call her mother. Afterward, she looked at Jack.

“Sir, thank you so much! Thank you! You have no idea,” she said vehemently and explained what happened to the female officer.

Another car showed up, and he was shocked to see a familiar woman emerge from it. It was Lilian. “Katherine! Oh my God! Katherine! You’re ok! You’re ok!” she yelled as she rushed to the girl and hugged her tightly.

Jack couldn’t believe it. Was Lillian this girl’s mother? Did she get married again?

Lillian pulled away from her daughter, who started explaining what happened, including Jack’s help.

“Mom, I think I was catfished. That man said he was in his 20s and tricked me into meeting him three days ago. They had kept me in that building over there for those days, and I think they were going to sell me. But I wrote ‘help me’ on a dollar bill and gave it to this man. He jumped in front of the car to save me. He’s my hero!” Katherine revealed and looked at Jack with a huge tearful smile.

Lillian finally looked at Jack, and despite his disheveled self, she recognized him immediately. “Jack?”

“Lillian,” he breathed. “She’s your daughter?”

The woman looked at the girl and back at Jack with a worried expression. She hesitated then revealed, “She’s your daughter too.”

Katherine’s eyes widened, and she asked her mother to repeat that statement. But Jack was in shock. He had just saved his own daughter. The daughter he never knew about because Lillian had kicked him out before telling him about her pregnancy.

“Jack, you look… well, not too good, but at least, you’re not drunk,” Lillian commented, getting closer. “But as you can guess, I kicked you out when I found out I was pregnant. I couldn’t have stayed married to an alcoholic and have him around my baby. So I made a decision.”

“I understand,” Jack mumbled. He truly understood, but it was still heartbreaking to learn how much he had lost. However, he was glad he was there to save his daughter from a terrible fate.

Lillian eventually got Jack some help as well as a new job to thank him for being Katherine’s hero. The girl started seeing her father often and they began to see each other as family. Katherine never spoke to strangers on the internet ever again.