Home » The dog adopted an orphaned wild BOAR! Just look at how the story played out… 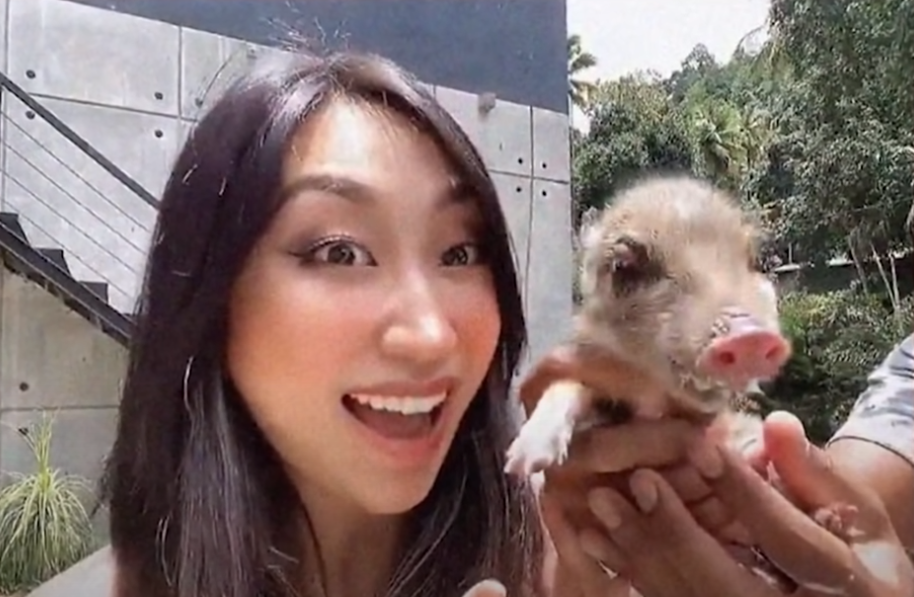 The dog adopted an orphaned wild BOAR! Just look at how the story played out…

It isn’t just dogs or cats who can make a great pet, but sometimes representatives of the wild world can also take on this role. It usually happens when for some reason, they end up being abandoned by their own parents.

While that means they would eventually face a tragic fate if people don’t interfere soon enough. I already told you about a man who took in a bear and a hippo and how the animals ended up thinking that people were their parents.

And now it’s time for another amazing story where the abandoned animal found a new family. Hedgehog. That’s the name of the animal featured in our video today. It’s about one year old now, and I’m sure he’s the happiest boar in the whole world. No one knows how or why, but last year, Hedgehog found himself in the garden of a young woman named Dora Nay from Sri Lanka.

The newborn Boer was struggling to survive. He was so small and weak and he was barely showing any signs of life. But being a brave little fighter, he refused to give up. Apparently, the boar found in the garden was about a week old and he had almost zero chance of survival because unfortunately, these animals don’t usually survive without the mother.

Even though the woman was pleasantly surprised by the strange find, she knew perfectly well that it would be nearly impossible to nurse the little Foundling to health.

She knew it, but nevertheless she decided to try. And thus, in addition to the four dogs she already owned, her house got a new animal residence. Having studied a lot of information online, Dora and her boyfriend basically became Hedgehog’s parents.

This meant that they had to feed him every hour during the first month, even at night, so he could grow and gain strength. Of course, the little thing also needed his mother’s warmth, but Dora came up with a clever solution.

The warm mother was replaced by a bottle of heated water during the first week at his new home. The little animal didn’t leave his box at all, which was both a soft bed and a refuge from the outside world for him. But a week later, he already had gotten a bit stronger and began to show interest in those around him.

And a little later, he was ready to meet Dora’s other pets. At first, the couple was very worried about how four adult dogs would react to a little pig, but they probably couldn’t have even imagined how smoothly things would go.

Boo Boo, a fond Labrador, lived with the family the longest and was a bit apprehensive of the newcomer. However, it was him who later ended up becoming Hedgehog’s best animal friend. The Labrador didn’t just accept the stranger, but he also began to nurture the little pig as his own puppy.

Boo Boo and other dogs soon got used to the new animal and seemed to take a liking to him. While Hedgehog it would seem got a bit confused and decided he was also a talk.

And that’s not all that surprising because he actually grew up with the representatives of the species. Thus, Hedgehog refused to leave the Labrador’s side, following him anywhere and everywhere. It actually looked rather funny. A little boy running around with the dog and seeing himself as one too. That’s not something you see every day.

Their relationship developed and eventually the two friends began to do everything together sleep, eat, and of course, play together. So Hedgehog was right to try to find a way to approach Boo Boo, as they now are the best of friends.

Dora and her boyfriend even built a small pool in the courtyard of their house for Hedgehog so that he could spend more time by the water. Although sometimes the couple lets the boar into their pool too, where he also feels great. In addition, Hedgehog has his little house in the yard, but most importantly, he has the best four legged friends one can dream of.

Doesn’t he seem like the happiest boar in the whole world? It’s been over a year since Hedgehog was found abandoned in the garden and he has put on a lot of weight and grown significantly since then. However, he still considers himself a little puppy who keeps trying to sit on top of Boo Boo. Overall, Hedgehog has dog habits and the only thing he hasn’t yet learned is how to bark like a dog. Although he’s still young.

As Dora and her boyfriend say, they aren’t going to give up their pet under any circumstances. Although they know well this little thing will soon become a real giant adult. Wild boars reach up to 2 meters in length and 120 CM in height and they can weigh up to 100 kg, which would make this puppy, as he thinks of himself, a rather strong and dangerous animal. Nevertheless, Hedgehog is completely harmless. And even despite his already impressive size, he still wants to be held like a puppy.

This is truly the happiest wild boar one could imagine. He doesn’t only get along well with the dogs and the owner, but also seems to fit in perfectly with the family overall. As you can see, even animals that are completely different in their lifestyles and temperament can get along well with each other. And it’s just wonderful.