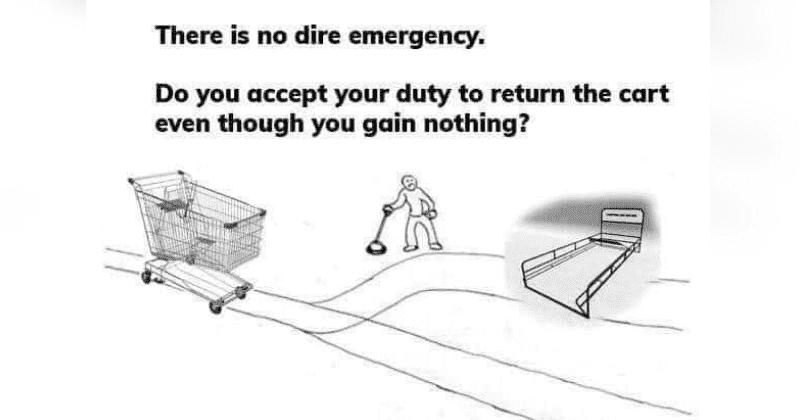 The Shopping Cart theory is a viral theory online that can apparently help determine a person’s character. It’s a way to test whether a person is capable of self-governing. Also, would they do the right thing even when it is not expected of them? The theory has been doing the rounds on social media. According to Bored Panda, it may have originated in the dark corners of 4chan. When Jared from Atlanta shared it on Twitter it became even more popular. The theory suggests that a person’s moral character can be determined if they decide to return a shopping cart to a designated “cart return” spot or not.

Many people agree with the theory especially those who have had to pick up after someone’s slack. One Twitter user wrote: I’m the cart guy at a grocery store and I can confirm that I look down at you when I see you abandon the carts. Please for the love of God and man and all that is right with the world RETURN YOUR CART. YOU’RE NOT HELPING ANYTHING BY DITCHING IT! PLEASE!

Psychotherapist and counselor Tati Silva also admitted that The Shopping Cart Theory makes a good argument. “It goes back to character and personality, both used to describe someone’s behavior,” Silva told Bored Panda. “Personality is shaped by one’s heredity and environment in which they were exposed, easy to ready (Lickeman, 2011). As for one’s character like honesty, virtue, and kindliness. They are revealed over time, through various situations. Characters are heavily influenced by the different situations we engage in. Therefore, if you choose not to take the shopping cart back it will expose your character,” Silva explained. “Because there is not a law that prohibits it or says that is wrong.

The behavior will continue because it is the individual that needs to determine what is right or wrong, bad or good because — again — there aren’t any social norms or rules that specify this behavior might be considered inappropriate.” The theory can be applied for other behaviors like throwing rubbish, cigarette butts, not holding the door open etc. according to Silva who added, “That might reveal your moral character. One might do it without being aware of it because it is engraved in their habit. However, that can be changed by expanding self-awareness. It is likely the first step in gaining control over any behavior you wish to change. “