Home » They Arrive Back At Home and The Walls Have Blood Splatter. They See Their German Shepherd and Discover The Scary Truth! 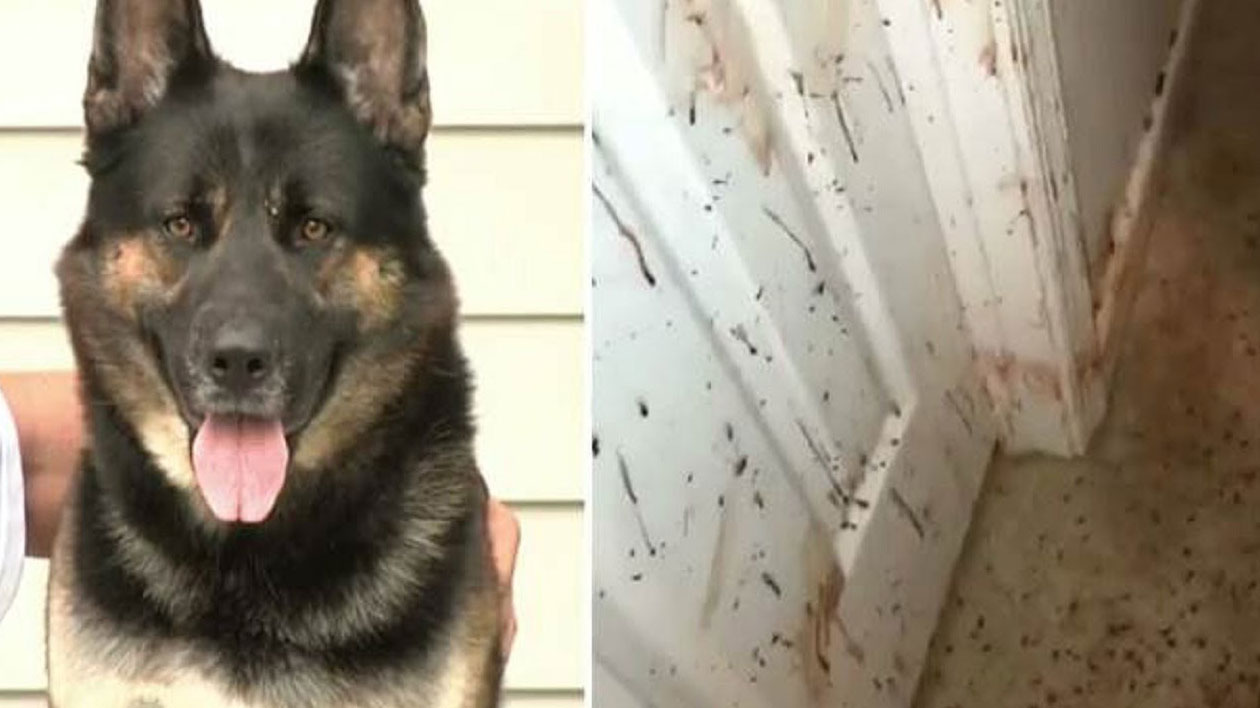 They Arrive Back At Home and The Walls Have Blood Splatter. They See Their German Shepherd and Discover The Scary Truth!

Anyone who shares their life and home with a dog knows how devoted and loyal they can be.  Our animal companions love nothing more than spending time with us, whether it be playing fetch, going on walks, or sleeping nearby.  When a dog owner has to go to work or leave them for any extended period of time, their dog is more than likely missing them the whole time they’re gone.  That’s why they go so excited and go crazy when you get home, it’s like they thought you were never coming back!

When Tristan Murrin arrived back at his Virginia home after being away on vacation for a week, his trusty canine companion, a German Shepherd named Oden, was waiting to greet him at the front door.  The big handsome dog was super excited, more so than Tristan expected, and at first he thought nothing of it. But as soon as he entered his house, he was met with an unbelievably shocking sight.

Blood was spattered all over the walls, up and down the stairs, and in practically every room inside his house.  There was so much blood in places that it had dripped down, and you could see where it had spurted on the carpet and doors.  After making sure Oden wasn’t harmed anywhere, Tristan concluded that his dog must have attacked an intruder who broke into his house.  There had been several robberies recently in the area and it was the only possible explanation for his house looking like it belonged in a horror movie scene!

After checking Oden, he then looked to see if anything had been stolen.  Nothing appeared missing, so whoever had broken in had probably been attacked by his dog right away before they could find anything worth stealing.  Oden must have chased them all around the house as well, that explained why the blood was everywhere.

Tristan called the police next and they came over to investigate.  They also notified all the local hospitals that if someone came in seeking medical attention for a dog bite to let them know, that would most likely be their suspect.  It didn’t take long for the story to get out and the local news soon showed up to interview Tristan about what happened. He praised his dog for protecting his home and said that “I think the dog did its job.”  He also said Oden has never been aggressive towards anyone, he knows all the neighbors and even plays with their kids, who absolutely adore him.

After seeing how protective and effective Oden proved himself to be at defending his home and property, Tristan couldn’t be prouder.  He especially loves German Shepherds and wants everyone to know that if they are thinking about adopting or getting a dog, they should go with that breed!