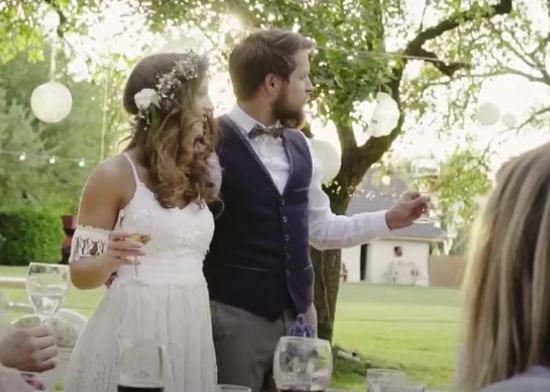 Many women imagine their wedding day as the happiest day of their life. For one particular bride, her wedding day turned out to be the most mortifying day in her life thanks to a decision or groom made. What’s worse is that the shocking story was later broadcast all over television.

One of the attendees of the wedding, Sean McInerney, went on a British talk show to happily report the events to the entire world. There has to be a solid reason to go through all the trouble of planning a wedding only to throw the entire relationship in the garbage.

Let’s take a look at what happened. Like America, Great Britain has many talk shows that bring on celebrity guests for a fun time. The Graham Norton Show is one such program. Stars go on the show to talk about their films or projects, all while comedian Graham Norton slips in a few jokes here and there. One aspect of the show that viewers love is that it isn’t all about the famous guests he brings on.

Instead, Graham concocted away for everyday individuals to get some airtime too. Before the show ends, Graham Norton saves time for audience members to sit in a big red chair. The seat is designed for those who are brave enough to face the cameras and share an intriguing story. This unique edition gets even more fun when Graham judges the storyteller. If he likes the story, they can tell it in full and entertain everyone watching.

However, if Graham finds the story unbearable, for whatever reason, he’ll flip the chair so the individual falls on their back. The man who decided to take on the challenge is Sean Mcintearty, an Irishman who had attended the wedding of a lifetime. While weddings can be a blast for many reasons, this was not the fun-loving time that you might expect.

Fortunately for him, Sean was not close to the couple and therefore didn’t have enough emotional attachment to be torn up over the insane turn of events. Furthermore, Sean mentioned that he isn’t fond of such events since he isn’t the most social of people.

In the end, he’s probably glad he went if for no other reason than having a crazy story to tell. Let’s see what happened that fateful day. According to Sean, the ceremony was beautiful and went on exactly as planned. The bride floated down the aisle. The two exchanged their vows.

Everyone cheered as the newly married couple made their way between the rows and loved ones. After the ceremony, everyone gathered at a dining area to eat. It was awful at this time that speeches would be given. What no one could have expected is that the groom had an elaborate plan behind everything that was about to occur. Next, we’ll reveal what the big secret was.

As it turns out, the groom had learned a heartbreaking truth about his wife. Before the wedding took place. Several people notified him that she had cheated on him with numerous men. Even worse, some of these men were friends of his and all were at the wedding. As the groom’s rage began to boil, he decided to keep himself together rather than cancel the wedding.

Right then and there, he rapidly concocted a plan to get his soon-to-be wife back. Despite the groom’s sudden hatred toward the woman he had just committed his life to, he had to keep calm if his plan was going to work. Earlier that day, while the bride busily and blissfully prepared herself, he snuck off to find where her many suitors were sitting. To indicate who they were, he placed a red dot beneath each of their plates. While it seems like a pointless thing to do, the groom had a trick up his sleeve that he would pull out later on.

Once everyone found their tables and seats, the group prepared to give a speech. He gained everyone’s attention and told them that they were going to play a game first. He needed everyone to stand up. The guests did so and the groom proceeded to ask them if they all turned their empty plates upside down. He instructed anyone with a red dot under their plate to keep standing while anyone without a red dot on their plate should sit down.

Gradually, wedding guests began to feel the tension emanating from the groom and his unusual request. The red dots were strange enough, but as people sat down, things started to feel even odder. The guests took their seats and looked around to see who was still standing. It was apparent that the only ones standing happened to be men, but not all of the men, just a small group of them. The bride was probably the first to put two and two together.

A wave of shock crossed the room as the groom announced that each of the men standing had an affair with his new wife. The bride and the men all grew red with embarrassment. The question on everyone’s mind was why the groom would go through with the wedding if he had known this. He continued to explain that he planned to get the marriage null that afternoon on the grounds of adultery. The bride began to cry, but it was too late.

The groom left without another word coming up. Let’s see, just how many men were left standing during all this. Part of why the groom scheme works so well is because of the high number of men left standing. It still would have been a good plan if it were only a couple of men standing who was accused of an affair, but it wouldn’t have had the same sting. Instead, a whopping eight men are standing at the reception who was called out for cheating with the bride.

As the bride’s parents attempted to console her, the guests remained frozen with shock. Everyone kept their eyes on the bride, knowing that the allegations must be true. If she had nothing to say. The surprise eased and guests started reaching for the bottles at the centre of the table. Party was over, but guests still attempted to gather themselves.

The groom certainly got his revenge, seeing that everyone would remember that day whenever they looked at his pride. The remainder of the evening was awkward. Guests had to debate whether to leave or support the bride right away. While some may have been close to her, there was no doubt that her choices had not been good. On top of that, anyone who had come from out of town would have travelled for nothing.

Then there was the issue of gifts. Do they grab their gifts on the way out or leave them for the mortified bride? As strange as that is, the groom carried on with the wedding. It’s also worth noting that the bride, too, was willing to marry a man she knew she had not been faithful to. This begs the question, did she love him?

If so, what happened next? Did she try to win him back or leave him alone, knowing that she didn’t deserve him? Sean didn’t get the chance to answer any of these questions because everyone was so taken by a story. Now let’s see how everyone on the show reacted to Sean’s tale. Sean made it through the entire story without the Red chair being flipped.

Furthermore, the celebrity guests and the audience alike cheered him on. Sean was officially allowed to walk from the chair flip free. While many of the viewers found the story entertaining, some looked around in awe. While nothing would compare to witnessing such an appalling event, hearing the story alone was enough to rattle the crowd. The best reaction of all that was the host, Graham Norton.

You can tell from Graham’s wide eyes and an open mouth that he was so shocked to hear the story, you’d think he was one of the guests at the wedding himself. This reaction, coupled with the story’s unexpected twists and turns, has some thinking this might be the best Big Red Chair segment to date. While the people on the show got a good kick out of it, imagine if the bride saw the episode. With such a popular show, someone who attended the wedding would likely have seen it. If you’re wondering how we know the story’s real, keep waiting to see what’s next.

With such an outlandish story, you may be wondering how we know that Sean didn’t just make the entire thing up. Well, there isn’t a way to know for sure. An exchange on Twitter gives the story some validity. One Twitter user praised Sean’s story, calling it the best Red Chair story ever. The part that makes it seem true is the person who commented on said post.

They claim to have heard the story before then Shirland is a small country. If this person had heard the story before, it would seem as though Sean was recounting events that did happen before he went on the show. The story became so popular that it even reached the ears of YouTuber Jason Gunn. He managed to get in touch with Sean to ask if he’d be willing to share the story again on his podcast. Sean agreed and told the entire tale again.

Though Jason knew how the story went, he couldn’t help laughing the second time hearing it. If the bride and everyone she knew didn’t watch the story of the Graham Norton show, they were bound to hear it in the podcast. Now let’s look at some of the reasons people love the story so much. One reason why Sean’s story may have gained so much recognition is that it isn’t the usual cheating story. Often it’s men that are assumed to be the unfaithful ones.

However, women can be unloyal too. Stories like Sean’s give validity to the good men of the world who have been hurt by a woman trust can be hard to have in any relationship. While this can be discouraging, it also makes it that much more special when you do find a solid partner. Anytime someone wrongs another, it’s natural to want them to be served justice. While the groom would get justice from the court when he got the annulment, it’s understandable that he felt this wouldn’t be enough.

Being cheated on is humiliating and takes a huge hit on the ego. By revealing what the bride had done in front of everyone they were closest to, Shawn prevented the story from being misconstrued by the bride. In other words, she had no choice but to own up to the truth. The groom could have gone another route. Well, it isn’t exactly an eye for an eye kind of story.

The groom certainly gave the bride a taste of her own medicine. Sometimes people who are cheating want to give back to their significant other by doing the same thing and cheating on them in return. If the groom had done this, he would have sunk to the level of his pride. Instead, he took the classier room. He gave her the feeling of shock and discomfort that she gave him simply by being honest.