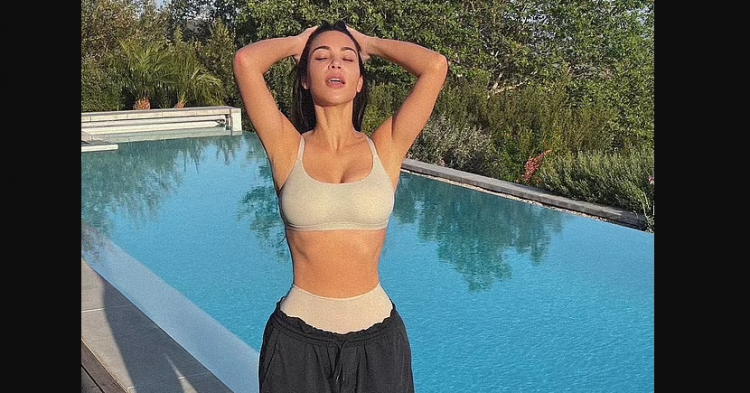 This Celeb’s Racy Poolside Photos Are Going Viral For Every Wrong Reason Imaginable….

The Kar-Jenner family is well known for their love of Botox, lip fillers, and other cosmetic procedures. Fans, however, were left perplexed in April 2022 when Kim Kardashian uploaded an Instagram picture in which it appeared that she had lost her belly button. Was that a Photoshop misstep? Also, is it possible that Kim underwent belly button surgery?

While relaxing by the pool wearing a set from her clothing line, the owner of SKIMS shared a couple of sensual pictures on Instagram.

The 41-year-old was dressed in loose black sweatpants over a nude lounge bra and a pair of high-waisted shorts.

However, following Kim’s spicy photo dump was attacked by fans, who accused The Kardashians star of airbrushing the photos to edit her belly button out of pictures.

With one person asked, “Does anyone else think this looks hella edited?”

“Where is her bellybutton?” yet another person echoed.

The second eldest Kardashian, however, is calling out Photoshop claims once again, She took to her Stories to address the rumors head-on, denying that she photoshopped her belly button in her latest selfie for Instagram.

“Come on guys… Seriously! This is so dumb! Claiming I photoshopped out my belly button????” she wrote.

She continued in a follow-up post, “Belly button insecurities? Well… why don’t you head on over to skims.com to conceal that saggy belly button of yours with a great pair of high-waisted underwear like I did! You’re welcome!!!”

Meanwhile, someone speculated that her high-waisted briefs might conceal her naval,

“Maybe her belly button is behind those higher waisted knickers?”

“I’m no Kardashian fan, believe me, but most belly buttons sit below the waist, so it is obviously under her pants.”

“I’d worry if her belly button was that high? What is wrong with people!”

However, Kim isn’t the only Kardashian sibling receiving criticism recently for photo-shopping. Khloé accidentally revealed recently that True and Chicago’s photographs were shared on Kim’s Instagram. A TikTok even went popular after it revealed screenshots of Stormi and Chicago wearing identical clothing that actually date back to October 2021.

People noticed that something about the series of images was certainly odd. Khloé, in yet another Kris-approved maneuver, quickly used the opportunity to promote the family’s new show while also using Twitter to respond in a surprisingly lighthearted manner.