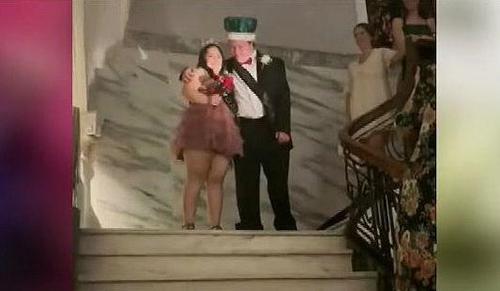 We often see kids with Down syndrome getting bullied — especially if they go to school full of varied students. The sadder part is not everyone gets the chance to experience what it feels like to be valued outside their homes.

But believe when people say there is still love and kindness in this world. You read that right: students from a high school in Virginia changed the lives of two kids with Down syndrome even for just one night.

In April 2022, a school called Jefferson Forest High School in Bedford County, Virginia, held its annual prom night for its students. Just like any other proms for junior and senior students, a prom king and queen were to be announced that night. Though unlike the promenade event most of us grew up witnessing, the ones the student body picked to be king and queen weren’t chosen based on the standards of the society we have been exposed to.

The crowned prom king and queen? Two precious individuals whom their classmates have chosen because they wanted them to feel like they are “a huge part of the school.” They are students with Down syndrome named Zane Wales and Anna Anderson

As seen in a video shared by Madison Doner of WSET via Taylor Perkins, Wales and Anderson were ecstatic the moment they found out they were hailed as prom king and queen. As soon as they started walking up the stairs, their classmates started cheering them on. In fact, the students went wild — a genuine moment among members of the student community.

In another video shared by WSET, Wales and Anderson can be seen enjoying their new royal roles on the campus.

Anderson said her favorite was dancing the night away, while Wales said it was all about getting the crown for him.

Heather Hevener, a teacher at Jefferson Forest High School, said her students came up with the idea of making them prom king and queen. But both Wales and Anderson had no idea what their classmates had planned for them.

“They see these kids every day. They walk the same halls with these same kids, and they just feel like they’re part of them, so they wanted to make sure that they also really felt part of them,” Hevener told WSET.

“Probably in February or March, I had a few students like, ‘You know what? This year, Zane Wales for prom king — let’s do it!’ So, they started the campaign on their own, and then, when we asked for nominations, Zane’s name came through,” Hevener remarked.

Meanwhile, several Facebook users shared how the moment between Wales and Anderson moved them after watching the video. “Love these kids it’s so awesome to see the love that the whole school gives. We need this more showing love and care,” one person wrote. “So beautiful, What an unforgettable evening. So warm hearted and love,” another person said.

It was indeed a royal treatment of a lifetime for both Wales and Anderson — and one that they will remember for the rest of their lives. The school staff said that they would never forget the heartfelt moment. So it’s definitely one for the books to everyone who witnessed that unforgettable point in time. A royal treatment fit for two amazing people!