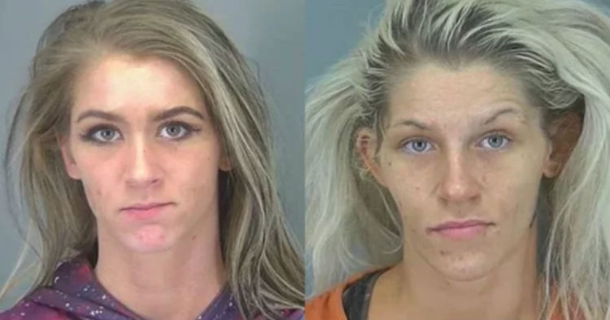 Two mothers from Lyman, South Carolina are in hot water with the law…and here’s why! Child abuse was alerted to authorities so officers arrived at the home on Lyman to find six children living in some of the most horrid conditions you could ever see.

The report came to the officers after a person saw six children wearing only diapers and playing in the front yard of the property. While this would be bad enough, the six babies were unsupervised.

After police made their investigation of the South Carolina abode, they quickly arrested two mothers. 27-year-old Fallon Stowell and 26-year-old Logan Stowell are now behind bars after they were charged with cruelty to children and the possession of drug paraphernalia.
Officers arrived at the property last Friday. And when they came up into the yard, the officers quickly found all six children.

Three of the babies were in diapers. And their diapers were so soiled that they were weighed down toward their knees like heavy packages filled with urine and feces.

The police did not hold back the gruesome details of the child abuse in their official report.
Police spoke to the oldest child at the scene. He admitted that his parents had left him at the property without any supervision except for his aunt, Fallon Stowell. She was home.

When police came into the property, they found Stowell asleep with a blanket pulled over her. After shaking her awake, Stowell told the angry officers that she and her sister are single parents and have three children apiece between them.

Police continued to search the home and quickly verified that it was not a safe place for children to live. Feces and trash filled the place. They also found empty liquor bottles and other drug paraphernalia about the home. The Stowell sisters were quickly slapped with charges. The house was severely unfit for children to be raised in.

Because the Stowell sisters were charged and arrested, the six neglected babies were removed from their custody and taken into emergency protective custody. The Department of Social Services is helping the children and responded to the scene when the police told them about the accumulation of trash and feces in the home.

The two young single mothers are now booked at the Spartanburg County Detention Center until they appear in trial in the New Year.
Readers on CrimeWatchDaily were upset about this horrible instance of child neglect.

Taking care of six children is not easy, but when the responsibility is thrown on you, you need to step up and do your best. Living in a downtrodden home filled with feces, trash, and empty liquor bottles is not acceptable for anyone, let alone a home with six children.
Hopefully, these women will learn their lesson and be better toward the kids.
What do you think should happen to them in court?