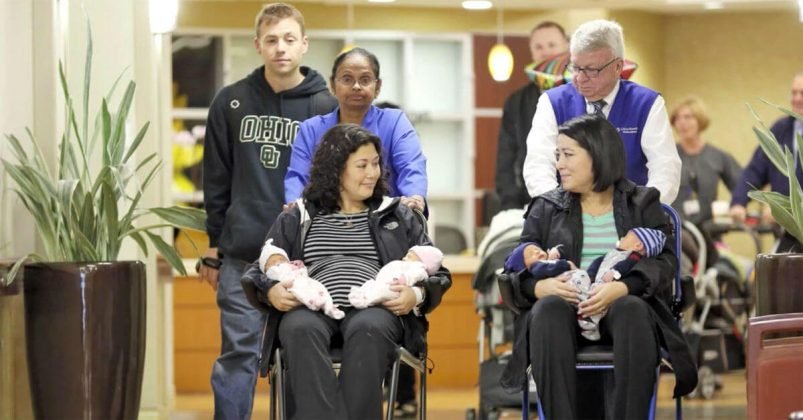 The ability to conceive a child is truly one of God’s greatest gifts.

For most couples, starting a family happens naturally, sometimes even a little too naturally, often catching parents-to-be by surprise.

Unfortunately, starting a family isn’t as easy for some couples.

Annie and Joby Johnson had been trying to have a baby for over five years.

Having realized that they weren’t able to conceive naturally, the couple had tried numerous medical procedures and fertility treatments to no avail.

Annie’s sister, Chrissy, couldn’t bear watching the emotional trauma that her sister was going through.

Over and over, she watched her get her hopes up, only to have her heart broken.

Annie, who was already a mother of two boys, decided to give her sister the ultimate gift.

She offered to be a surrogate for her sister and carry her baby for her.

Annie and Joby eagerly accepted Chrissy’s magnanimous offer, and the procedure was scheduled.

But, instead of implanting embryos in only Chrissy, they decided to try one last time with Annie as well.

Each sister had two embryos implanted, and waited in anticipation.

And, they were both carrying twins.

It was truly a miracle.

Annie and Joby had been trying so hard to have a child for so long, and now they were expecting four.

Both sisters carried the babies to full-term, and decided to have C-sections on the same day.

Annie watched as Chrissy gave birth to Tommy and Charlie.

Then, Annie had Gracie and Haddie. Joby, Annie, and Chrissy were blessed with perfect, healthy quadruplets.

The excited parents are welcoming the challenge of raising their new family.

In all of their hopes and prayers, they never imagined how fortunate they would become.

And, they know that they will always have the overwhelming support of their families.

Sometimes, blessings can happen when you least expect it.