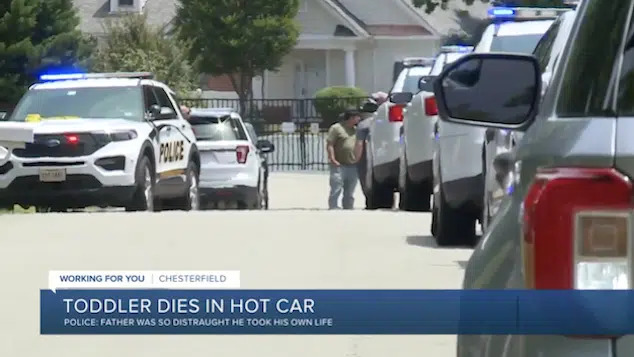 Chesterfield Virginia father shoots self dead after 18 month old hot car death. Boy had been left alone in sweltering conditions for up to 3 hours. Forgot to drop him off at daycare earlier in the day.

A father shot himself dead outside his Virginia home Tuesday after discovering his 18-month-old son’s lifeless body inside his hot car in the family’s driveway, Chesterfield police said Tuesday.

Police said the child appeared to have seemingly be ‘accidentally’ left in the vehicle for as many as three hours before the father took his own life WTVR-TV reported.

According to WRIC-TV, the man’s family members called the Chesterfield Police Department at about 11:42 p.m. after he called relatives to inform them of the child’s death and of his suicidal plans.

‘As [police officers] were responding, they were advised that there may be a deceased child at the residence,’ Chesterfield Police Lt. Col. Christopher Hensley told WTVR.

According to WRIC, police said a second family member who contacted the department while officers were en route to the Aldengate Road residence stated that they had been made aware that the toddler was never dropped off at daycare Tuesday morning.

‘Upon their arrival, they located a vehicle in the driveway with an open door with the empty child seat in the vehicle. As they made entry into the residence, they found a deceased 18-month- old inside,’ he added.

The 37-year-old father was found dead by officers in the woods behind the home of what appeared to be a self-inflicted gunshot wound, WRIC reported.

Hensley called the situation a ‘horrible tragedy on so many levels,’ WTVR reported.

‘Our hearts go out to the family and friends that are going to deal with this, but we would be remiss in not taking the opportunity for people to take this moment and realize how important it is to obviously check your vehicles as you go through.’

The 18-month-old is the seventh child to die as a result of being left inside of a hot car this year, and the 914th since 1998, according to noheatstroke.com, a website started by meteorologist Jan Null that tracks such deaths.