Home » Walmart Shoppers Hear Noise Coming From Trunk, Sick When They Realize What Was Inside 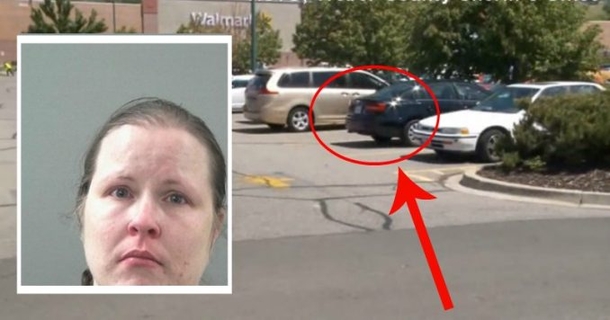 Walmart Shoppers Hear Noise Coming From Trunk, Sick When They Realize What Was Inside

Two patrons were walking out of the Riverdale Walmart in Utah when they unexpectedly heard an odd noise nearby. It didn’t take them long to realize that the sound was coming from inside the trunk of a car, and when they learned what it was, they were left sick to their stomachs.

When a woman named Heidi and her unidentified friend walked out of the store and began to unload their groceries into their vehicle, they were caught off guard when they heard an unusual noise coming from a nearby car’s trunk. Perplexed, Heidi immediately walked over to the car and put her ear on the trunk. Unfortunately, she was sick to her stomach when she realized what was causing the noise – two kids were locked inside.

“I could hear some kids crying,” she recalled, according to KTLA. “I turned to my friend and I’m like, ‘There’s people in this trunk. There’s kids in this trunk!’”

Heidi, her friend, and two other women started trying to help the trapped children, who they would later learn were just 2 and 5 years old. In fact, one of the women even says she had witnessed the children’s mother lock them inside before casually walking into the store alone.

“I started talking to the little girl that I could hear screaming,” Heidi said. “She was (yelling), ‘Mom, let me out! Let me out! Mom! Help!’ She was screaming, crying.” Of course, they then slowly instructed the young girl how to open the trunk using the emergency latch. Eventually, the trunk popped open and the terrified and sweaty children escaped.

“Both kids just came out… they just jumped out at us,” Heidi said. “One lady took the 2-year-old, I took the 5-year-old.” Of course, while the group of women was waiting for the police to arrive, the disgusting mother, who was later identified as Tori Castillo, returned to her car from inside the store. Making matters even more disgusting, the only excuse she could come up with was five sickening words, “My babysitter didn’t show up.”

The mother has since been arrested and is facing four counts of child abuse with physical injury and one charge of theft. Her children have been turned over to Child and Family Services, according to BizPac Review.

It’s disturbing to see that there are people who are so selfish that they’ll lock their own children in the trunk of their car just to make their shopping trip easier. These two children could have easily suffered heat strokes from being trapped inside a hot trunk. Clearly, she doesn’t know how to properly take care of her children, and they will be better off with anyone other than their own mother.

Although caring for children can sometimes get exhausting, a mentally stable and loving parent would never consider doing something like this. Once you become a mom or dad, your needs are no longer the first priority – plain and simple. If you can’t handle that, then you don’t deserve to be a parent.