Home » When A Mother’s Baby Vanishes, Rescuers Discover Something That Will Break This Case 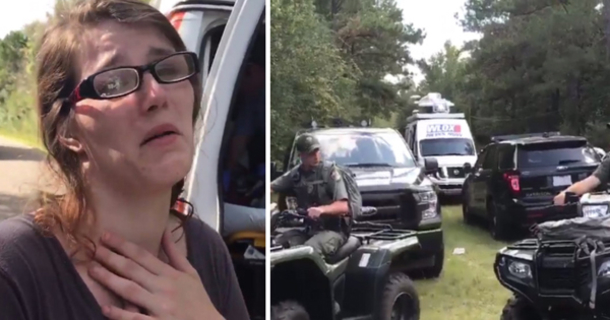 When A Mother’s Baby Vanishes, Rescuers Discover Something That Will Break This Case

When parents go to sleep at night, they hope to find their children safe and sound when they wake up the next day.

It’s an unspoken prayer that one young mother probably wished she had voiced out loud. Her worst nightmare came true after she discovered that her toddler was missing, having seemingly vanished without a trace overnight.

After an extensive search for the little boy by both ground and air, authorities discovered mysterious tracks leading across the river, and into a nearby patch of woods.

Rescuers found the two-year-old’s footprints but gasped at the realization that there was a second set of footprints the family wasn’t anticipating to find. Mom sobbed as she realized the truth. 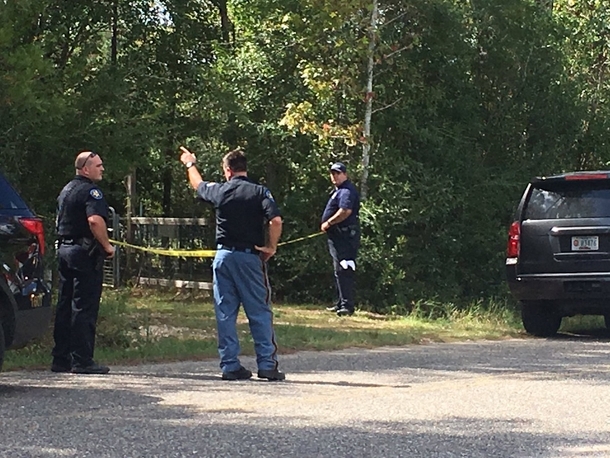 Chelsea Noble awoke that morning without a clue that anything was wrong inside of her house. Sadly, when she went to check on her toddler, William Odom, he was gone! The frantic mother immediately phoned the police for help, but as the hours passed, the situation seemed to only get worse. In missing persons cases, a second set of footprints is usually as ominous as it sounds.

Either someone was leading the boy into the woods, or they were stalking him as he tried to run away. No matter how you look at it, William wasn’t alone on his journey. Mom was especially scared for the outcome, because her son was being tested for autism, and is nonverbal. He probably couldn’t ask for help even if he tried.

Search teams were desperate to find the poor toddler as quickly as possible! They knew that the second pair of mystery footprints was the key to finding the boy. Unfortunately, no matter how many K9 units, Wildlife & Fisheries agents, ATV search teams, and helicopters they employed, Harrison County Sheriff’s Deputies never did find little William.

That discovery actually goes to a very stunned 10-year-old, who accidentally came upon his uncle’s abandoned truck. Blake Carroll had been drawn to the area after he stepped off the school bus. He heard the truck’s horn blaring, but he wasn’t exactly sure what he would find. Blake had no idea a little boy had gone missing earlier that morning. The fifth-grader told WLOX News:
“I wasn’t expecting it to end the way that it did. I might remember it the rest of my life.”

When Blake found the dirty Nissan Frontier, it looked like it had been dumped there ages ago. However, what really caught his attention was the stray dog that was circling the truck, and barking like mad! The anxious pooch kept pawing at the driver’s side door, trying to get at whatever was inside. 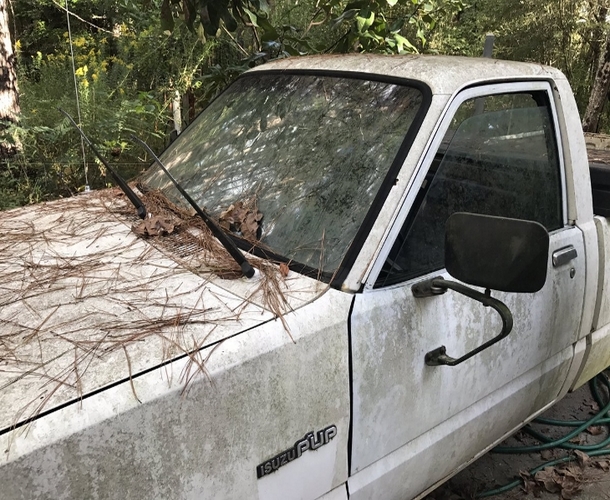 Blake told his uncle about the truck and the dog, and when the pair returned to the scene, the boy’s uncle forced the window down. That’s when they discovered little William sleeping inside, still wearing the diaper he had on when he went missing. Sheriff Troy Peterson told WLOX:

“He was inside the truck apparently sleeping. His back, when we got him, he had a bunch of stripes on his back that matched up to the seams in the truck. So we’re thinking he was just in the truck sleeping.”

The authorities believe the boy ventured outside on his own, and there was no foul play involved. As for the second set of footprints? 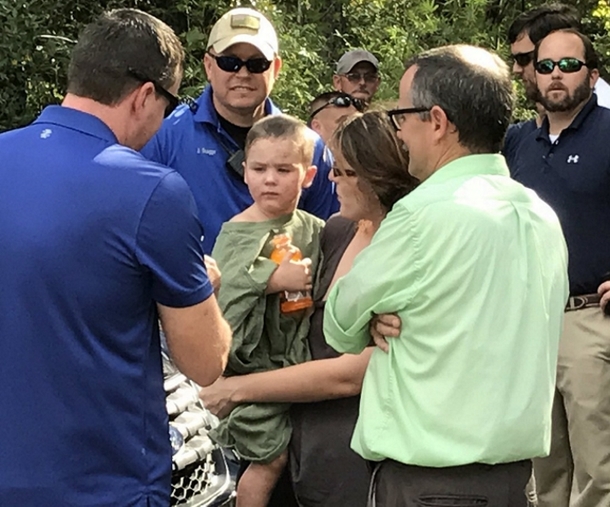 Well, let’s call them paw prints, and they belonged to his unwitting traveling companion, Jezebel. With amazement in his voice, Sheriff Peterson said:

“Every time we found his footprint, we found the dog footprint right beside him. So the dog traveled with him all day.”

Just like the poem “Footprints in the Sand,” William’s furry best friend Jezebel was always right there with him, protecting him while he embarked on a perilous journey. She was probably the one who helped the toddler get to into the driver’s seat, offering her back as a booster, so he could crawl inside to safety. Awww, this super sweet pooch is definitely an angel!