Home » Why Did This Couple Wait 9 Years To Open Their Aunt’s Wedding Gift? 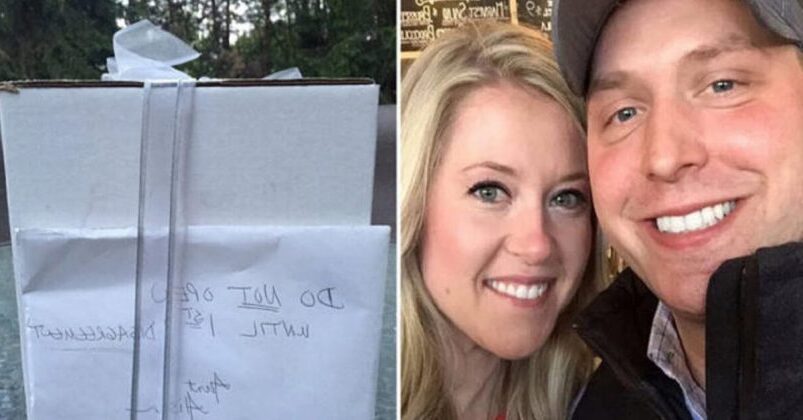 Why Did This Couple Wait 9 Years To Open Their Aunt’s Wedding Gift?

How do you keep a marriage together? How do couples stay together for over a half-century, if not longer?

How do they maintain their happy, loving relationship that is so strong?

Surely, these are questions every newlywed couple can’t help thinking of. After all, the goal is ‘till death do us part’. So when Brandon and Kathy, a newlywed couple, received a wedding gift with the instructions to only open when they experience their first disagreement, it is a label that grabs their attention!

Especially since that it came from their great aunt and uncle, Allison and Bill, whose marriage had lasted nearly half a century and is still ongoing.

What was inside, perhaps, the secret they need to fix their marriage once it hits the breaking point? The couple certainly thought so.

Obviously, over the next 9 years of their marriage, there had been plenty of arguments and disagreements.

There were even several points in their relationship where the two of them had thought of giving up and going their own separate ways.

Throughout all of these moments, however, they had never sat down to open that box and learn its secret. In a way, it was their pride that made them refuse to check out its contents.

After all, to open it would have meant that they had failed to reconcile, and that their marriage was no longer salvageable.

Being both determined and stubborn (perhaps to a fault), the box proved itself to be a catalyst for reassessing their situation.

Was this really the worst fight they have had? What if an even bigger argument between came up in the future, and by that point they had already exhausted their box? Although it was possibly the most meaningful gift they had ever received, opening it was a symbol of failure the duo refused to acknowledge.

Three house moves and nine years later, and the box remained firmly packed into the closet.

It was only when the two of them were talking about wedding gifts for a wedding in Kalamazoo they were going to attend did they bring up the box again. To be honest, there really wasn’t a need for them to open the box anymore.

They hadn’t thought about it for a long, long time now – their relationship had gotten past its initial rocky start, and was as stable and as loving as it ever could be.

So, just what was in that package?

As it turns out, not much!

Inside was a crystal flower vase, a pair of wine glasses, a bar of bubbles and bath soap, some lotion, and two handwritten notes addressed individually to Kathy and Brandon. Both were even given some money to do as they were told! Although the material items inside the package can be easily got anywhere, it was really the gesture that had the biggest impact. It taught the couple to exercise patience, which was how their marriage has prospered!