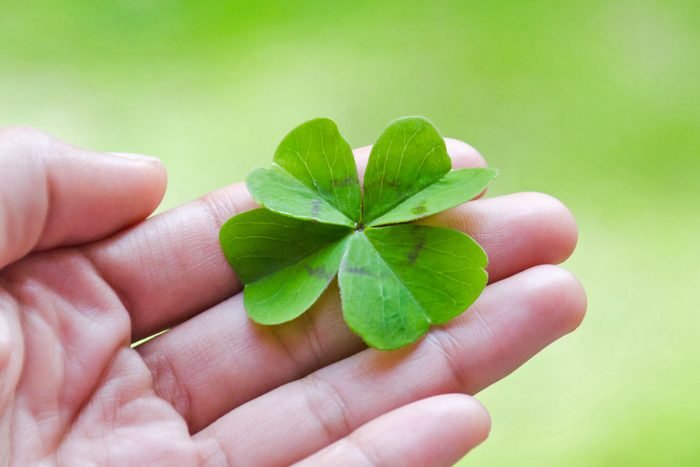 Why Four-Leaf Clovers Are Considered Lucky

We all know carrying a four-leaf clover will bring you good fortune, but the history of this lucky symbol may surprise you.

Whether you’re a fan of the Boston Celtics or just have a countdown to St. Patrick’s Day on your calendar, you’re definitely aware of the shamrock (a.k.a. the three-leafed clover) and all it represents: Ireland, Celtic heritage, and, of course, a fun St. Patrick’s Day tradition and symbol. But when it comes to the shamrock’s famously lucky relative, the four-leaf clover, its meaning gets more complicated.

Why is the four-leaf clover considered lucky?

One legend has it that the luck factor comes from Eve herself. As Adam and Eve were leaving the Garden of Eden, Eve is said to have plucked a single four-leafed clover as a souvenir of paradise, and this religious connection has led to them being considered lucky ever since. The Celts considered four-leaf clovers to have magical powers of protection, able to ward off evil and bad luck. It was also believed that carrying a clover allowed the bearer to see fairies. Celtic fairies were dangerous little creatures who might play deadly tricks or steal your children, so carrying a clover meant that you could take evasive action if you spotted one. By the way, did you know that this is why we wear green on St. Patrick’s Day?

Another legend says that when St. Patrick brought Christianity to ancient Ireland, he used the three-leafed shamrock to explain the Holy Trinity: one leaf represented the Father, the next the Son, and the third the Holy Ghost. However, the belief that four-leaf clovers are lucky may have already existed among the Celtic peoples, probably because of the proliferation of clovers in Ireland, and the rarity of finding one with four leaves. Many Celtic traditions were blended with the new religion over the years, and the importance of the clover was one of them. The four-leaf clover meaning became intertwined with Christianity so that the first three leaves came to represent faith, hope, and love, and the fourth leaf, God’s grace, or luck.

Why do four-leaf clovers exist?

Although it has been said that four-leaf clovers are exceedingly rare—as few as one in 10,000—an independent study carried out by Swiss researchers looked at 5.7 million clovers and found that the likelihood of finding one four-leaf clover was one in 5,076 three-leafed ones. Much better odds!

A genetic study at the University of Georgia concluded that any more than three leaves on a clover are due to a genetic mutation in the genome of the common clover species, white clover (or Trifolium repens). This tracks with the Swiss study, where they discovered that the likelihood of finding a five-leafed clover (the extra leaf represents wealth, so keep an eye out for these) was one per 24,390 three-leafed clovers, and the chance of a six-leafed clover was one per 312,500 three leafers. No word as to the meaning of that sixth leaf, but being so rare, it must be something lucky. Make sure you also read up on these St. Patrick’s Day memes that are just too relatable.

What is the difference between shamrocks and four-leaf clovers?

The short answer: one small leaf. Shamrock, which comes from the Old Irish word “seamróg”, means “little clover” and describes a three-leaf clover. Since a four-leaf clover has four leaves, it’s not considered a shamrock. That small lucky leaf makes all the difference!

How to find your own four-leaf clover

The Swiss researchers have some advice as to finding your very own four-leafed good luck charm during the St. Paddy’s festivities.

Next, make sure you have some of these St. Patrick’s Day jokes up your sleeve before the holiday rolls around.