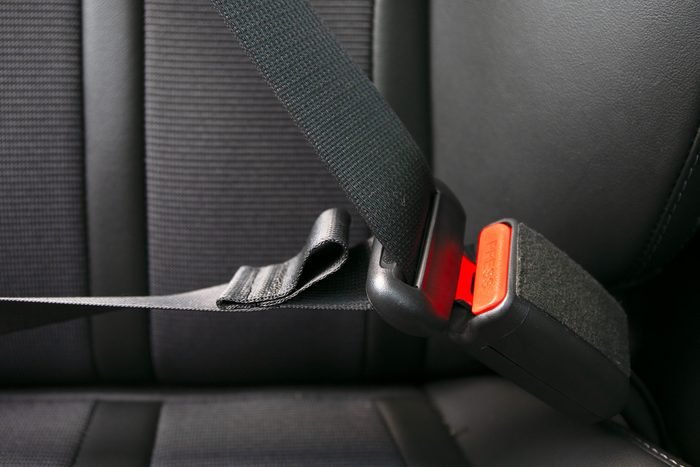 Have you ever noticed that the seatbelts in your car have a fabric loop by the buckle, but the driver’s seatbelt doesn’t? It’s all about making us safer.
Seatbelt secret

Whether your car has racing bucket seats, luxury leather interiors, or durable fabric seats designed to withstand your dog, there’s a seatbelt feature that many cars have in common. On all seatbelts except the driver’s one, there’s a fabric loop just by the buckle. The driver’s seatbelt has no loop, but rather a small button just below the buckle. You may not have noticed this or other weird car features before, but it’s actually there for your safety. This feature doesn’t exist in every car; the Toyota Prius, for example, has buttons below the buckle on every seatbelt and still manages to have a five-out-of-five-star safety rating from the National Highway Traffic Safety Administration. So not finding fabric loops on your car’s seatbelts isn’t necessarily a cause for concern. But the feature is extremely common. Even in cars that do have fabric loops on the seatbelt, their owners may never have noticed it, or just don’t know what it means. And why isn’t there a loop on the driver’s seatbelt? We reached out to automotive experts to find out. By the way, does your dog need a seatbelt?

What is the fabric loop on seatbelts for?
According to Jake McKenzie, Content Manager at Auto Accessories Garage, the fabric loop on seatbelts is called an energy management loop. “It’s designed to rip under intense stress,” says McKenzie. “By ripping, it can cushion the blow of a collision by a few inches and help keep the passenger safe.” If you’re unlucky enough to be in a crash, the loop will rip open. This gives you a few more inches of seatbelt to work with, dissipating the impact, which stops your seatbelt from ripping and prevents injuries to you as well. Preventing injury is also the reason you might find a dryer sheet in your mailbox one of these days.

Grant Clelland, IT Consultant & Tech Expert at Infiniti Tracking, which specializes in vehicle tracking, identifies an additional purpose. “Another use of this loop is that it keeps the buckle of the belt from hitting the side of the car time and again as the car moves,” Clelland says. It also keeps the buckle at a convenient height for use, stopping it from falling down the seatbelt and ending up on the floor. This makes sense—we’ve all had to deal with the annoyance of something rattling around in a place we can’t get to as we’re driving, like loose change. This partially explains why the driver’s side never has one. “The driver’s side seatbelt does not have a loop because when the car is moving, it is always supposed to be buckled in. So there’s no point preventing it from hitting the side of the car,” Clelland explains. But what about driver’s side safety? For another car curiosity, learn what those numbers on your tires mean.

Why is there no loop on the driver’s side?

On the driver’s seatbelt, there’s no fabric loop—only a button which keeps the buckle from slipping down to the floor. However, while the loop on passenger seatbelts is there to enhance passenger safety, the lack of it on the driver’s seatbelt is actually to keep drivers safe, as McKenzie explains. “On the driver’s side, it’s even more essential to keep the driver secured because hitting your head on the steering wheel could be fatal,” he says. “The energy management loop is absent from the driver’s side because every millimeter matters in the event of a serious collision.” If the driver’s seatbelt were to gain an extra few inches in a car crash, it puts the driver at higher risk of injury. When it comes to car safety, it’s important to think about the position of each person in the car—for instance, the National Highway Traffic Safety Administration recommends keeping children in the back seat until they’re 13 years old, and they should fit within the seat belt properly. For even more safety while traveling, consider flying with a tennis ball in your carry-on—it might save your life!