Home » Wife Calls Husband After Going Shopping But Having No Money To Pay. What He Says Next Has Her In Tears 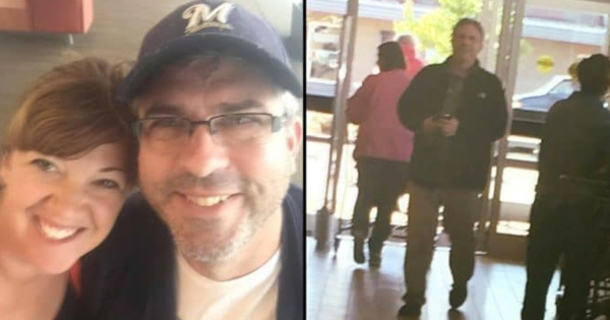 Wife Calls Husband After Going Shopping But Having No Money To Pay. What He Says Next Has Her In Tears

When we think and talk about love, we talk about amazing romantic gestures, love letters, romantic getaways and acts of selflessness.
While this is what everyone thinks about when it comes to the perfect love, it may not happen exactly like that on a day to day basis.

Many times love is showed in the little things that are done. For example, washing the dishes while your significant other rests, letting them watch the show they like, bringing home some flowers “just because.”

Love doesn’t have to look big – often it’s the small gestures that are the most meaningful.
Amy Betters-Midtvedt and her husband, Todd Midtvedt, seem to have this pretty well figured out.

Amy is a writer for Hiding in the Closet with Coffee and a recent post of hers went viral after she described the simple thing Todd did to show her love.

“Listen up young ones,” she wrote. “This is what your knight in shining armor looks like when you are in your 40s.” 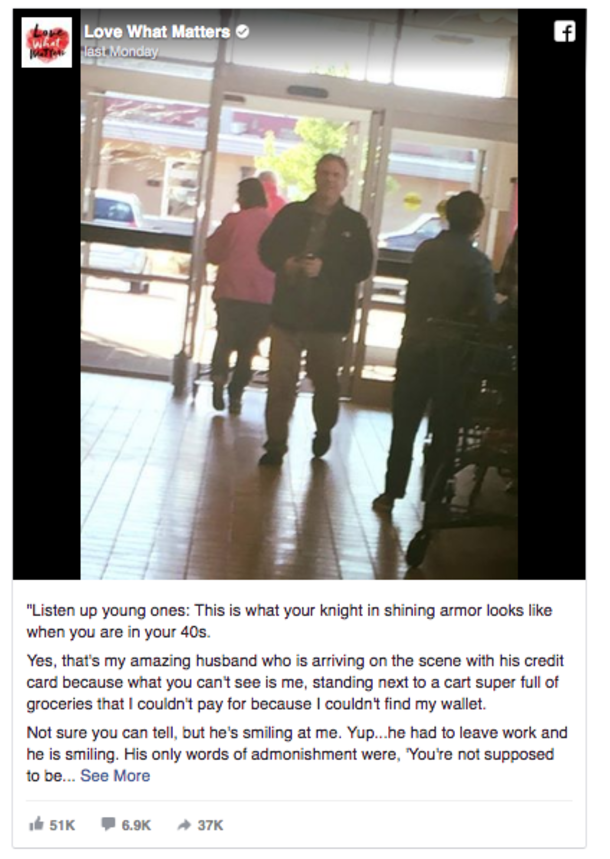 Amy described how she had gone grocery shopping and loaded up her cart with supplies for the family. However, when she got to the checkout line, she couldn’t find her wallet anywhere.

Panicked, she called Todd who left work immediately and came to her rescue.
“Not sure you can tell, but he’s smiling at me,” Amy wrote in the caption of the photo. “Yup…he had to leave work and he is smiling. His only words of admonishment were, ‘You’re not supposed to be grocery shopping; I said I’d go this week.’”

Amy went on to describe the many little ways Todd shows her love every day. She wants her readers – especially the younger ones who often have an idealistic view of love – to recognize that love isn’t always a fairytale; sometimes it’s mundane and even downright hard.
“Young people, this is what love looks like when you’re old and it’s ridiculous how awesome it is,” she wrote.

“Love looks like running to the store before bedtime after your wife has forgotten to buy milk; because you know the morning will be easier if we can serve up some cereal.”

She even provided some tips for recognizing these good qualities in a partner before committing your life to them:
“In college, this love looked like boyfriend ‘Todd’ running to the store for a danish I was craving, or watching me and my friends on the dance floor long after he wanted to leave the bar, or him being known across campus by the flower backpack he was carrying—which of course, was mine.”

“Young people, listen,” she continued. “Do not be fooled by big, showy promposals and giant cards with candy bars glued to them with some cute saying or by your name spelled in pepperoni by a boy who’s asking you to homecoming.

“That isn’t the stuff that lasts and let’s be honest…moms are totally helping them with those things.
“Watch how he treats you when Instagram isn’t looking.
“That is where the signs are.

“Choose the man who will carry your too heavy flowered backpack in public because he will also be the man who bails you out at ALDI’s when you’re 40-? with a smile and a hug.
“And that my friends is true love.”
Please be sure to share this story with family and friends!