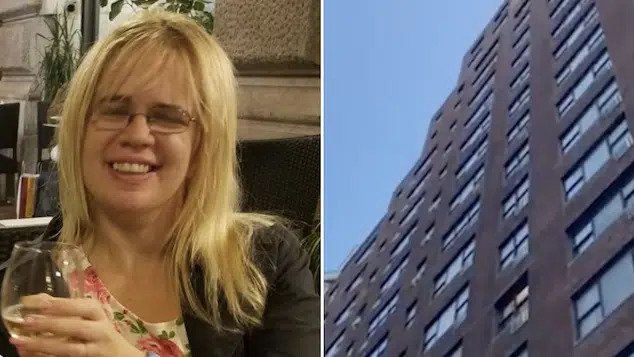 A 30 something year old woman, who jumped to her death from a Sutton Place, Manhattan luxury building early Tuesday morning lived with psychotherapy mom according to a report.

Tiffany Brodvin, previously reported as being 40 years old, was described by neighbors as a ‘quiet and nice’ lady who had been staying with her psychotherapist mom Dr Susan Kett.

The rehabilitation specialist was often seen holding on to her mother’s hand in the Sutton Place where they lived before the daughter seemingly taking her own life around 7am on Tuesday.

Police were called at 7.14am to 157 East 57th street where they found Brodvin’s body lying on the sidewalk.

Officers said her wounds were consistent with a fall and she was later pronounced dead at the scene.

‘quiet and nice but troubled…’

Neighbors said it was not the first death at the upmarket skyscraper – which they dubbed ‘suicide building’ – with another said to have happened just two years ago.

The luxury building consists of 111 apartment units over 19 floors. A listing on Streeteasy documented a two-bedroom apartment offered for rent at $6,150.

One of the residents said one of the superintendents was very upset and said, ‘Not again,’ the dailymail reported.

Tenants at the building described Brodvin as ‘quiet and nice.’ A neighbor told of the woman having some type of disability and a ‘very sweet girl’.

Told Fernando Molena, 21, who worked at a local store:  ‘It’s strange because it happened here two years ago, but maybe just more of a coincidence.’

Adding: ‘I saw [the victim] last Wednesday. She was friendly and would always wave when she passed the store.’

The worker who saw the gruesome sight of Brodvin’s body along the street, recalled the victim having blonde hair wearing a red dress.

A longtime resident at the building, said Brodvin appeared to be struggling with mental health issues.

‘She had some issues. She lived with her mom and she had a dog.’ the neighbor told the dailymail.

The woman said she was very close with her mother. She would always see them walking around the streets holding hands or walking with their arms entwined.

The resident said that the mother and daughter had lived in the building for more than 17 years.

It wasn’t the first apparent suicide at the building.

A woman fighting cancer jumped from her fifth floor apartment, two years ago.

Brodvin graduated from Hunter College, located just blocks away from where she was found dead, in 2005 with a degree in English Language Arts.

At the time of her death, Brodvin was working at Braverhood, a mental health clinic in Brooklyn. She describes herself as a rehabilitation specialist.

Not immediately clear is whether on the day of her death, Brodvin had been scheduled to be at work. Brodvin according to Braverhood began working at the clinic in 2018.

The most recent public posts on Brodvin’s Facebook page show fundraisers for the charity Autism Speaks.

She was previously married. In July 2014, Brodvin wrote on her page she was married again.

When questioned about who she was married to, Brodvin wrote: ‘Same husband, we are back together, working it out.’

In 2016, she wrote on her page: ‘A friend told me a few weeks ago there is a saying in Korean: Your first husband is a Jalopy, the second one is the Mercedes. Now its time for me to find my Mercedes.’

Her mother, Dr. Susan A. Klett, is the co-director of the Washington Square Institute for Psychotherapy and Mental Health.

She has a private practice on West 57th Street, according to her LinkedIn page. She is a graduate of Columbia University.

In the book, Klett paid tribute to Brodvin writing: ‘To my loving daughter, Tiffany Laura Brodvin, who understands and respects my work, sharing her time gracefully.

Brodvin left behind a suicide note, the nypost reported.

Its contents were not immediately known. No known motive was publicly divulged.

Sutton Place is one of the most exclusive neighborhoods in New York City, according to Forbes.

In 2021, City Health Commissioner Dr. Dave A. Chokshi said that New Yorkers were still suffering hard mentally from effects of the Covid-19 pandemic.

Every 16 hours, someone dies from suicide in New York City. Based on Community Health Survey data, 2.4 percent of NYC adults ages 18 and older seriously thought about killing themselves at some point in the past 12 months, Chokshi said.

Among those with suicidal ideation, 14.1 percent attempted suicide in the past 12 months. September is Suicide Prevention Awareness Month.