Home » Woman Notices Soldiers By The Side Of The Road, She Gasps When She Discovers What He’s Up To 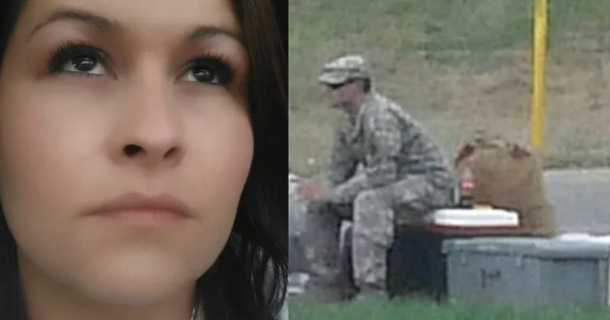 Woman Notices Soldiers By The Side Of The Road, She Gasps When She Discovers What He’s Up To

A lady was in traffic waiting at a stoplight when she looked out the window and noticed a soldier sitting on a bench. Seeing people relaxing outdoors isn’t an uncommon thing on a afternoon in Kansas, however what this solider was doing made her pull over in total amazement.

Tammra Bose was driving by herself in Topeka, Kansas when the soldier peeked her interest. If she wasn’t stuck at that stoplight, she probably would have missed this amazing moment. She would have passed by the spot before the man dressed in fatigues made it his perch for a specific reason.

The witness told WIBW that she saw the soldier pull over on the ramp and quickly jump out of his car. Confused by why he took the sudden action, she waited to see where he was headed. That’s when he walked right up to a bench surrounded with all of one man’s possessions, and the soldier took a seat. Across from him was a homeless man, sitting alone on an upside-down bucket. 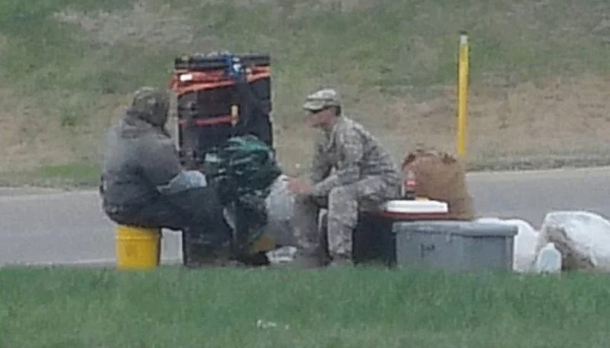 Photo Bose captured in Kansas of soldier and homeless man

In 2011, the homeless population in Kansas consisted of roughly 2,570 people, and overcrowding at homeless shelters has been an issue in the state, LJ World reported. Homelessness is also an ongoing issue for veterans.

Roughly 11 percent of the adult homeless population are veterans, according to the National Coalition for Homeless Veterans. About 1.4 million other veterans are reportedly at risk for homelessness due to poverty, lack of support systems, and substandard living conditions in overcrowded housing. [Source: Opposing Views]

Feeling so moved by the good Samaritan, Bose snapped a picture of the heartwarming scene. It was important to her to share with the world that our fighters are not only fierce defenders of our freedom, but they hold a deep compassion for their fellow citizens of this great country, regardless of their social status.

The character of this unidentified hero is as strong as his grit. His actions are a reminder that we all can spare a few minutes in a day to show someone who needs it that you care. Nothing else mattered in that moment, except for this homeless man to the soldier, who has respect for Americans and knows that nobody should be left behind.
Please share the story and tell us what you think!