Home » Woman Trapped On Plane Next To Insulting Man When Deep Voice Says ‘We Are Switching Seats. Now.’ 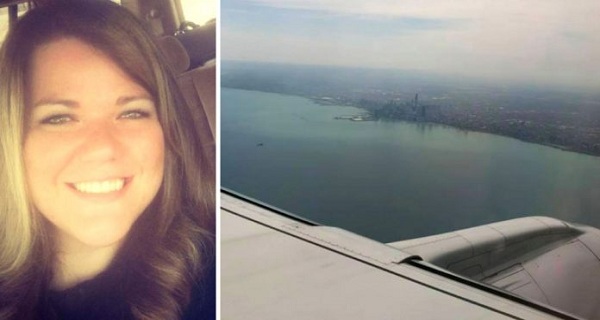 Woman Trapped On Plane Next To Insulting Man When Deep Voice Says ‘We Are Switching Seats. Now.’

32-year-old Savannah Phillips is pretty used to traveling on airplanes, but when she experienced a terrible and heartbreaking situation, she wasn’t quite sure what to do.

She was getting ready for her flight to Chicago when the flight’s time was moved earlier because of incoming storms.

She didn’t get to choose her seat and it was assigned to her when she got to the gate.

his made her quite nervous, as she usually tried to sit alone in a row for her comfort and the comfort of others, knowing she is a plus-sized woman and feeling insecure about the weight she still carried from her pregnancy.

Savannah was seated next to a man in his 60s who said he was a comedian. He was wearing bright sunglasses and seemed friendly and kind at first.

But then, as a flight attendant began to give the customary safety speech, the man took his phone out.

Its screen brightness was turned to the max and the font was made very large, so it was very easy to see what was on it, especially for Savannah, who was just a foot away from it.

And what was on that screen crushed her.

The man started to text someone and said that he had been seated next to a “smelly fatty”.

Savannah felt sick to her stomach when she realized this man thought of her that way.

She battled her own insecurities about her body daily as she struggled to work off pregnancy weight.

She looked away and began to cry quietly, and was horrified when she heard that the plane would face a 30-minute delay before take-off, so she’d have to spend more time next to the old man.

Then, all of a sudden, a man tapped on the cruel comedian’s shoulder and demanded to switch seats with him.

He said he could see the texts from his seat and refused to put up with seeing that.

The seats were switched and the man, named Chase, was shocked that she was crying and had seen the tests.

He told her things would be fine and they talked about their families, jobs, and lives.

Savannah was so thankful for what Chase did!

A flight attendant who knew what happened even treated Chase to multiple drinks for free, as thanks for his heroic actions.

Find out more about what happened when Savannah was able to find Chase again after the flight in this video!